Done in a way that is equal parts research, expertise, creativity, and design 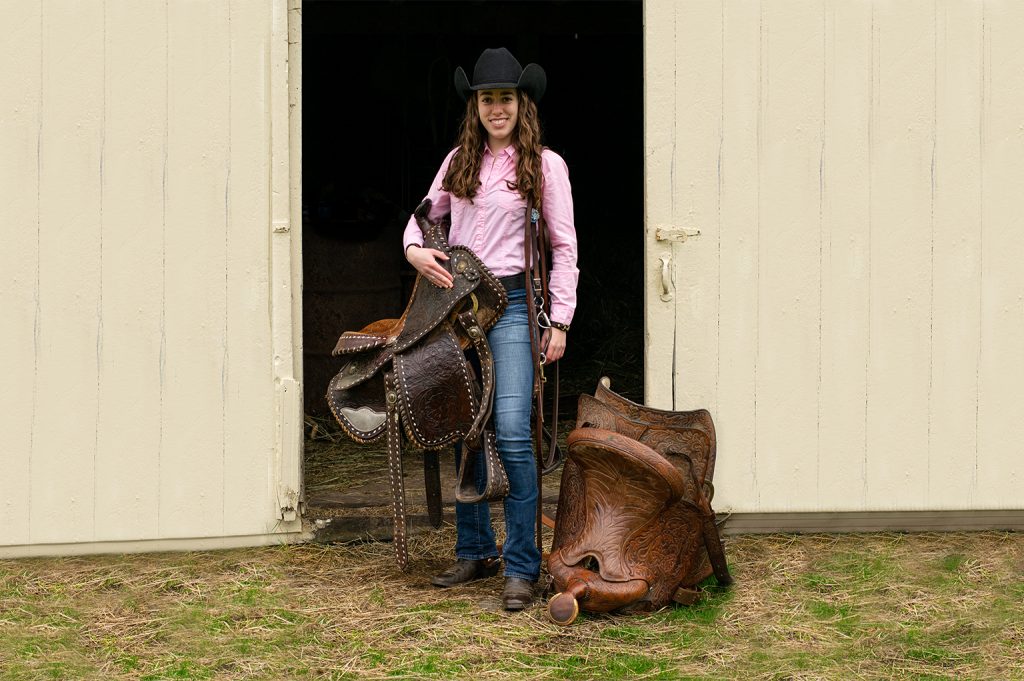 Katie Terry found herself in a strange situation. She had a solution, only she wasn’t quite sure of the problem. It happens more than you think in the lead-up to the Graphic Design Senior Show.

You can see why if you understand the prompt that launches Graphic Design Technology students into their Senior Seminar (Senior Sem) course. The task at hand is broad – to identify a problem and design its solution; that’s it. Sometimes you need to work from back to front.

She has refined it as the year has gone on, but Terry’s solution is to make master-artists, specifically, trained leatherworkers, accessible to the public. The goal is to provide easy access to highly-skilled craftspeople and their work, and create learning opportunities for those interested in designing their own leather goods.

Her project specifically targets Upstate NY. Apprenticeship and educational resources pairing masters of these skills with the public exist elsewhere in the country, most notably out west. But there is a need here, and in many other locations. 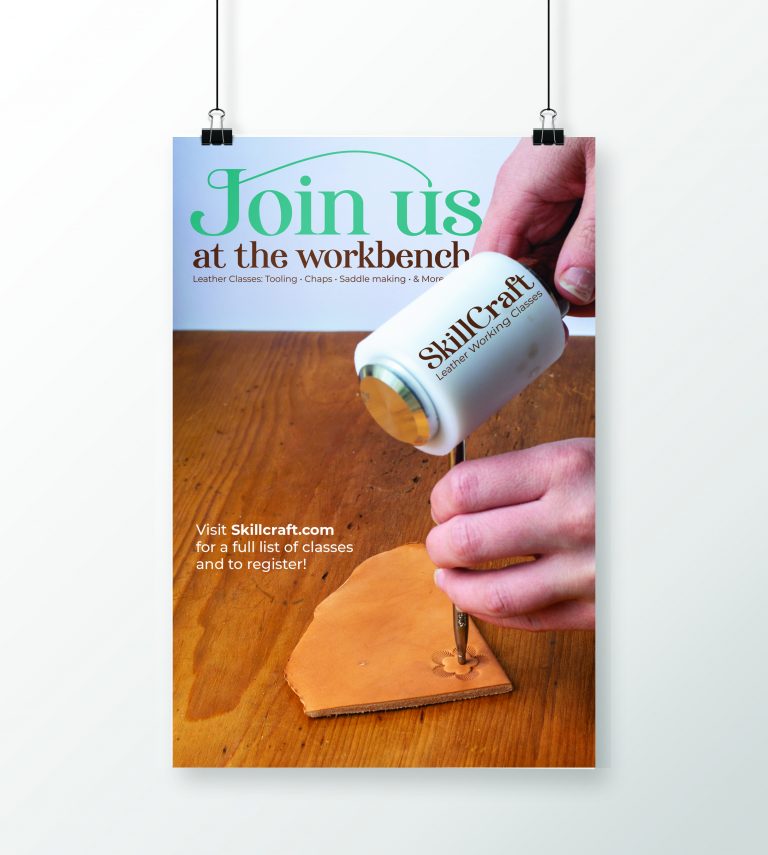 “There aren’t a ton of places to do hands-on leather work in a formal, educational environment. And there isn’t an organized way to hook up trained, professional leatherworkers with people who are wanting to learn the craft,” says Terry. “Teaching and accessibility are big parts of this.”

“This” is called SkillCraft. It is the nuts and bolts of Terry’s senior project – an organization that brings leatherworkers and their specialized abilities to those who want to learn or use them.

Equal parts conceptualization and product design, Terry has created everything from logos, to business cards, to digital graphics for SkillCraft. She will be making an in-depth virtual presentation for her portion of the Graphic Design Senior Show on May 7. In it she will talk about concept, business model, real-world opportunities for grants and expansion through entities like Cornell Cooperative Extension and 4H, brand marketing, and more. 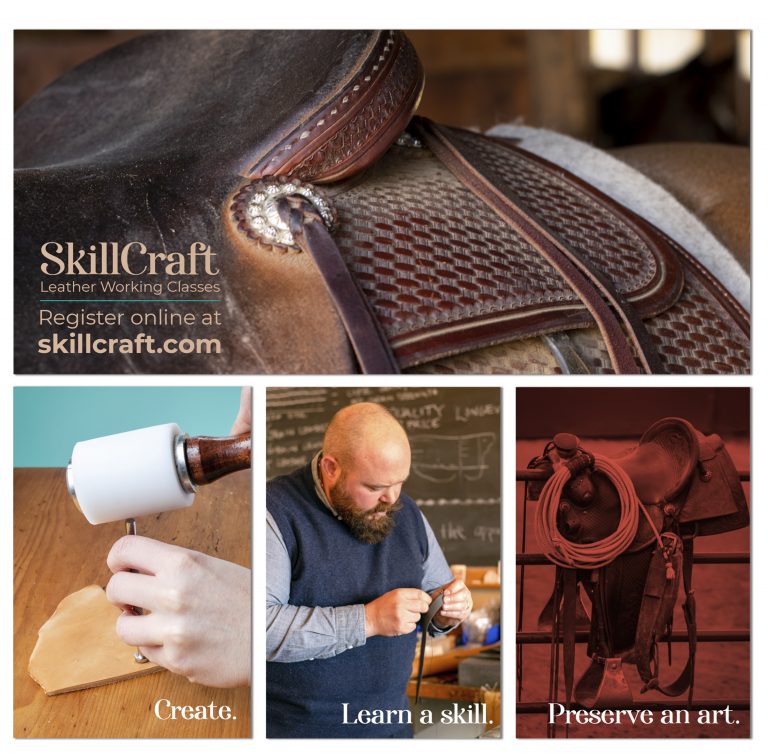 Senior Sem is designed for this very thing. The multiple layers of the course’s sole assignment serve to prepare a new class of rising-professionals each year for immediate industry success. A single, comprehensive project mimics the demands of industry. As those demands evolve, so does what it takes to create an outstanding senior project.

Back to Terry’s problem of not having a problem.

“I had a tough time finding my ‘why?’ “Why is this needed, who is it really serving, and where in the world does it live? There was never a question that the skills are practical. But where and why are we delivering the skills?”

She isn’t the first designer to search for their ‘why?’ The research piece of Senior Sem is an enormous undertaking. Even when you do have the problem and solution squared away, hours of research fill the calendar.

It was personal for Terry. For as long as she’s been at Coby she has been a rider on the Western Equestrian Team; she has been a horsewoman for far longer. Her own experiences inspired her research. With horses and her graphic design coursework, her time in 4H and projects each summer at the County and State fairs, Terry rattles off sewing, saddle-making, canning, silversmithing and about a half dozen other hands-on skills one can master with access to formal training. 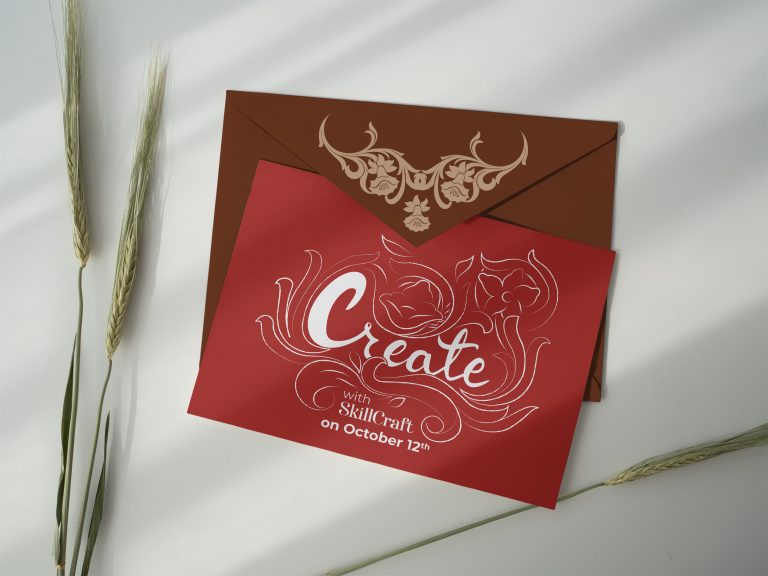 “I have always felt, and heard, that working with your hands has a calming sensation. But what I found is that it has a very tangible therapeutic quality,” says Terry. “There is so much to be said for hanging on to these hands-on skills like sewing, and leatherworking, and silversmithing for what they are, in a practical sense. I also learned how (these skills) are an outlet for a variety of populations, as well as a valuable skill. Working with your hands is a way to alleviate stress and anxiety.”

Much of her research was firsthand. Terry had the opportunity to attend Art of the Cowgirl, the annual event outside Phoenix, that brings women together around horses and western arts and culture. Her fellow attendees included professional riders, silversmiths, saddle-makers, artists, vendors, and ranchers. They aren’t SkillCraft clientele, but they are certainly among the expert professionals who would be part of such a service.

“I would talk to some of the women, and their outlet would be the same thing they were doing all the time – leatherworking, saddle-making, painting, silversmithing…It was their outlet.”

She also spoke with some leatherworkers here in NY – some established, and some just starting out. They expressed their wish for a resource either fixed in their region, or one that would be able to pop in from time to time. Terry calls SkillCraft a travelling classroom. The in-state leatherworkers are her inspiration.

The research was enlightening, though you can make a case Terry is expertly qualified to conduct it. Her path in and through SUNY Cobleskill – the riding, the designing, the balance – has prepared her for this very project. It touches on all she and the College are about: blending the hands-on with the real-world, for the benefit of many.

After a year of perfecting it, it now sounds a lot like SkillCraft.