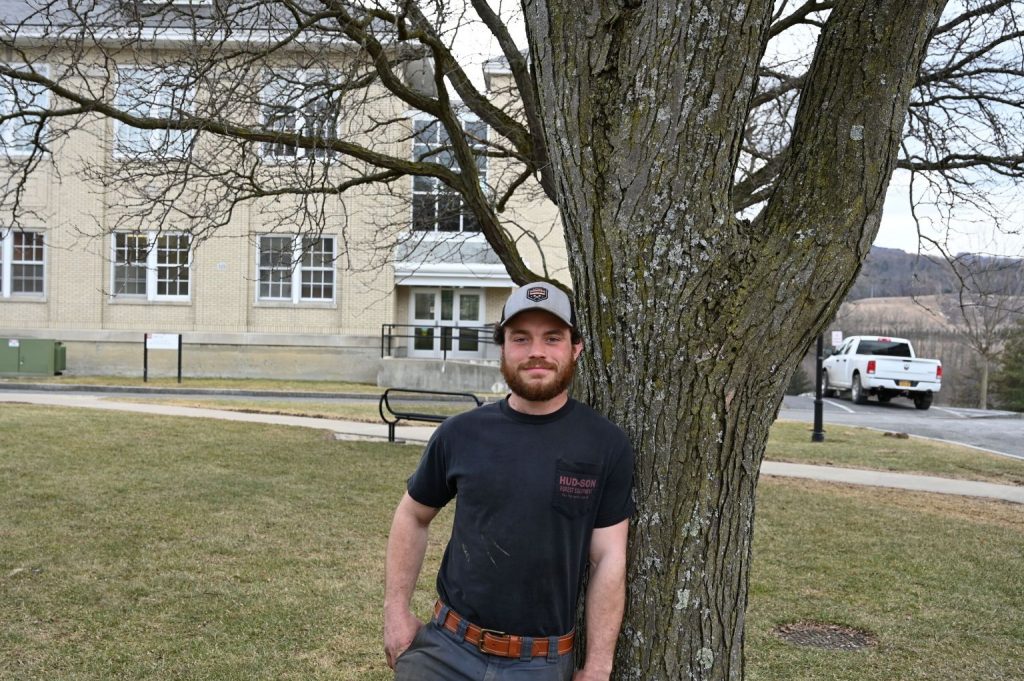 Have you ever heard us use the phrase “entrepreneurial spirit?” If you follow Coby news, it’s likely that you have. It tends to pop up all over the place.

You might recall reading about it in some of our alumni features – like the one we published on Tate’s Bake Shop founder and Class of 1979 alumna Kathleen King. Here it is again back in 2015 in this SUNY article about Class of 1995 graduate and professional comedian Pete Dominick. Maybe you’ve just discovered it on your own as a member of our community.

While an entrepreneurial spirit may flourish at any time, there is something about SUNY Cobleskill that seems to instill one in students. This isn’t something that comes to light only after graduation, like a right of passage, or an unlocked door. If anything, the door unlocks once you arrive on campus.

We caught up with AJ about a year and a half ago when he started selling homemade maple products on campus. The syrup and especially the candies were popular sellers that first Christmas, and they remain so today. Ever the entrepreneur, AJ has expanded his business. He has also launched an entirely new one – Fletcher’s Tree Service – since the last time we spoke.

The backstory to launching his tree service business is a fascinating story, full of appetizing visuals. It involves AJ spending six months in Northern Michigan as a professional lumberjack. While he’s a member of the Woodsmen’s Team here, it was in Michigan that Fletcher worked lumberjack shows alongside a certified arborist. There is a proper way to climb trees.

Fletcher’s business takes him throughout Schoharie and Eastern Otsego Counties. With two individual businesses to run, he says his focus has shifted to marketing.

“I am marketing better than I ever have, and so I am selling (my product and service) better than I ever have. It has grown from realizing I can make money, to how to make money, to now how to sustain and grow.” On the maple front, he says he started by setting up a handful of taps. The next season he put in about 20, and the season after that about  80. Fletcher maxed out at about 700 taps this year.

“Just being a student at SUNY Cobleskill has opened up avenues as a business owner. I take the concepts from the foundations of different classes – marketing, networking, planning – and it serves as the encouragement that I need to do something productive.”

It helps that the Carriage House Café and General Store gives Fletcher a convenient place to promote and sell his product. It has also led to connections that sometimes overlap from one of his businesses to the other. The support shows up in other ways.

“The College has given me a lot of time and flexibility to grow my business, and I really appreciate that. My advisor knows when it’s sap season and what that means for me. The faculty has been very understanding.”

There may be a third business up and running by time we have our next chat with Fletcher. We don’t mean the lemonade stand he ran as a kid – his first operation. He has spent the year working with the Ag Business faculty (particularly Assistant Professor Steve Weir) to create a business plan that transforms the Fletcher family farm into a destination for agritourism.

This spring he launched a new endeavor, when he planted his first plot of Christmas trees.

“An ambition of mine is to begin to help people in my shoes,” says Fletcher. “I can take the lessons the College has provided me and ag education. I am proof that if you put the thought and the work into it you can launch, and you can grow.”