On the Bright Side: SUNY Cobleskill fishing team catches on quickly at tourney

Communications & Marketing
In the Media
November 6, 2014 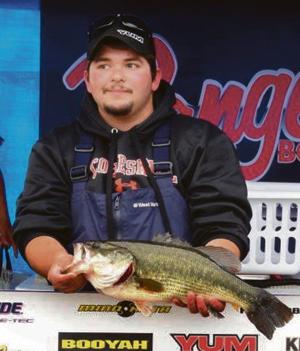 Ever since SUNY Cobleskill established its first-ever collegiate fishing team in February, the college has been hooked on the sport, according to organizers and members of the club.

The Bass Fishing Club and Team just concluded its first season after reeling in second place at the New York Chapter of The Bass Federation Collegiate Cup Championship on Oct. 18, organizers said.

And the entire college is riding the wave, according to Roy Bilby, one of the team’s advisers.

“The whole campus is looking at it and is proud,” Bilby said. “This could put our school on the map.”

Mitchell Monini, a SUNY Cobleskill Fisheries and Aquaculture sophomore and president of the Bass Fishing Club and Team, represented the club at the championship, which took place at Lake Champlain near Ticonderoga, according to a recent media release from the college.

Monini, an avid fisherman, held his own against 16 other established collegiate fishing teams from Penn State, West Point, SUNY Plattsburg and RIT, according to James Thatcher, the team’s other adviser. Monini secured 2nd place by catching five Largemouth Bass with a combined weight of 15.8 pounds, Thatcher said.

The school decided to create the Bass Fishing Club and Team after a college fair-type event at which SUNY Cobleskill had a table, Thatcher said. Many potential students, both male and female, approached the college’s table and asked if there was a bass fishing team at the college.

“At that point, the answer was no, so the students walked away from our table,” Thatcher said. “So many people asked about a team that it became imperative to get one. It will be a great recruiting tool.”

Now, there are about 20 students in the club, Thatcher said. The group gives “Fish Heads” and “Bassaholics,” as they sometimes call themselves, a place to share fishing stories, discuss favorite tackle and compare fish pictures.

Because the club is in the beginning stages, the college is in possession of only one boat to use in competitions, so only two anglers can compete at a time, Thatcher said. However, “it’s just the beginning,” he added.

“Ben and I knew that we didn’t have to fish both qualifying events,” Monini said. “We could have easily stopped at the first one and called it a day — but we felt we needed to show the strength of our team.”

The key to success in competitions is finding the right kind of bait that will attract the fish, Monini said. On the day of the championship, he used slow moving, black and blue-colored bait.

“After all, they’re the source of fish for next year,” Thatcher said. “They’re the stars of the show.”

Monini said the club meets regularly, has held various fundraisers, including a fishing derby and a wildlife festival, and is active in community service, such as reservoir clean-up days.

“Next year, the sky’s the limit,” Bilby said. “It’s great to see what this team has accomplished in such a short period of time. There’s so much talent and passion in this club. I am confident that this team will continue to develop and advance in the future, placing (them) well on their way to being a dominate force in the collegiate bass fishing competition.”