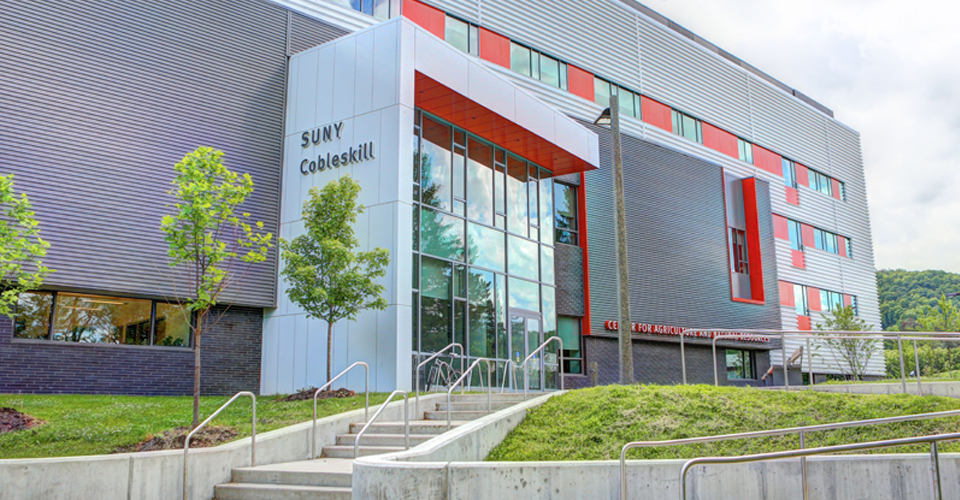 The awards recognize the outstanding work of the College as a whole as well as the individual efforts of faculty and staff members.

Dr. Lynn Geoffroy, Assistant Professor of Animal & Plant Science at SUNY Cobleskill, received the 2016 Beef Quality Assurance Award, which honors an individual who makes extraordinary contributions to promoting Beef Quality Assurance (BQA) in New York. Dr. Geoffroy was selected for her work ensuring that all of her animal health students receive BQA training and Dairy BQA training, as well as requiring her students to complete the Masters of Beef Advocacy training. She has also assisted with a number of events beyond campus to promote the BQA program.

Betsy Jensen, Meat Laboratory Manager at SUNY Cobleskill, received the New York Beef Producers Educator of the Year Award for her work in educating SUNY Cobleskill students as well as consumers and producers throughout New York State. Jensen has been involved with various educational workshops outside of the campus, including organizing a competition and education session for the New York Junior Beef Producers Association.

SUNY Cobleskill and the student chapter of the American Animal Producers Club were both recognized with the New York Beef Producer’s Friend of the Industry Award. The College received the award for its exceptional work to educate students about the beef industry, as well as its unique programs such as the ongoing meat processing workshops held in partnership with Harvest New York. The American Animal Producers Club was recognized for its role in organizing the New York Junior Beef Producers Fall Festival, along with the junior educational programs the club operates.