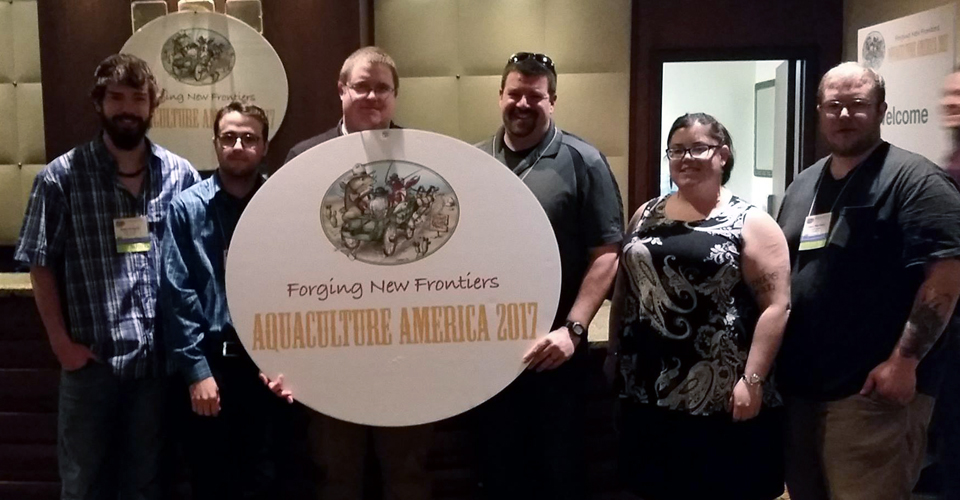 SUNY Cobleskill Fisheries & Aquaculture students and faculty traveled to San Antonio, Texas, on February 19-22 for “Aquaculture America 2017,” the annual international conference and exhibition of the World Aquaculture Society. The conference is one of the world’s largest meetings of professional aquaculturists, with more than 3,000 attendees from nearly 60 countries.

Hatchery Manager Brent Lehman and students Melissa Miller, Jason Ratchford, Dylan McGarry and Dan Garrett presented the results of research they’ve been conducting in the course of their studies at SUNY Cobleskill. They met with distinguished Fisheries & Aquaculture alumnus Dakota Raab, who is now a graduate student at Kentucky State University.

“Our Fisheries & Aquaculture undergraduate research program is second to none,” said John Foster, founder of the program and Professor of Fisheries, Wildlife and Environmental Sciences at SUNY Cobleskill. “The World Aquaculture Society conference shows that our students’ research projects successfully compete against the work of graduate researchers and professionals.”

Below are summaries of the research presented at the conference:

Increasing effluent regulations have put pressure on the aquaculture industry to develop new strategies for treating hatchery effluent.  The Fisheries and Aquaculture Program at the State University of New York at Cobleskill has developed a low maintenance, low cost method of reducing the discharge of solids and nutrients from the campus’ 40,000-gallon recirculating trout hatchery. Our research showed that a constructed naturalistic stream planted with watercress and coupled with a settling basin effectively controlled nutrients and solids year round, without the capital and resource requirements of mechanical filters.

Pugnose Shiners are endangered in New York, being rare in the St. Lawrence and extirpated from Cayuga Lake and most of Lake Ontario. This project was initiated to demonstrate the feasibility of utilizing pond culture techniques to produce enough Pugnose Shiners to restore them in their native range in New York State. This is the first study demonstrating the feasibility of pond culture of Pugnose Shiners and the potential for this technique to restore this species to its native range and abundance in New York State. Thousands of Pugnose Shiners were produced on campus and stocked into Lake Ontario the first year of the project. Culture techniques refined by this project may also be applicable to Minnesota, Wisconsin and Canada, where this species is of special concern, threatened or endangered. (Douglas M. Carlson of the NYS Department of Environmental Conservation and Scott Schlueter of the US Fish & Wildlife Service collaborated on this project).

Australian redclaw crayfish, also known as freshwater lobsters, are a new and promising aquaculture species. Fast growth rates, easy care and maintenance, combined with a high market value make this species attractive to the aquaculture industry. However, development of a domestic freshwater lobster industry is largely hampered by the need for a reliable supply of seed stock. This study examined two types of benthic substrate to determine whether production of 45-day old craylings could be enhanced. The addition of substrate significantly increased survival and production of craylings. Matala performed better than the coarse rock, because it had higher survival and was easier to handle for capturing the craylings.