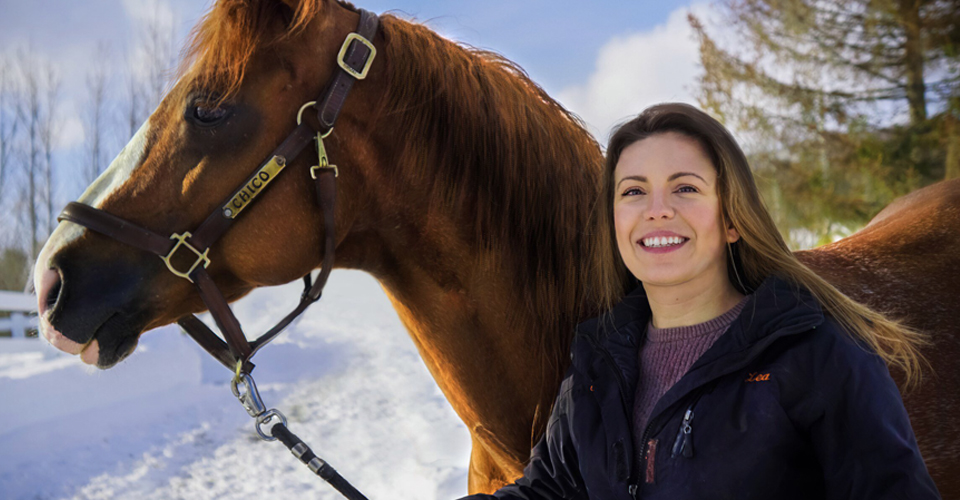 The Saturday of February 18 was the beginning of another indolent weekend for many students who dwell in the dorms at SUNY Cobleskill. Saturday, for the average student, usually begins in a bed that allures the leisurely to roll over and luxuriate in dreams of the preceding night and ends in the same bed, with a slow waddling to dining facilities in between.

But the same Saturday morning that sways the campus in a hypnotic tranquility takes an entirely different form in the SUNY Cobleskill Equestrian Center. As I walked in, the long wide aisle of the western side of the barn was bustling with people. 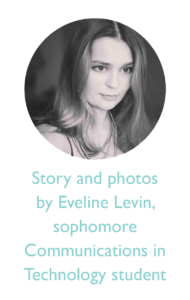 Heavy western saddles, with leather carved ornaments recalling the dusty romance of the Wild West, were lying upside-down along the aisle, and bridles with the peculiarly arched mouthpieces were hanging on the shutters of the stalls. Back in the day, western riding was a true workday necessity — deep wide seats were designed for the long hours cowboys had to spend in the saddle — but today it has turned into a distinctive style and a competitive sport.

In nearly every stall, athletes were busy grooming and tacking up their horses. Soon enough the air was filled with the clatter of hooves and jingling spurs striking the asphalt with a poised rhythm – riders were leading strings of saddled horses out onto the sands of the indoor arena for a morning team practice. For a moment, the barn went quiet. In the middle of the arena, Lea Di Gioia, a small young woman with a big presence, wearing glasses and neatly coiffed hair pinned in a bun, was following each of her riders’ warm-up with a fixed gaze — there was no doubt I was looking at the Head Coach of the team.

For the SUNY Cobleskill Western Equestrian team, it was their final practice at home before heading to the horse show at Morrisville State College early the next morning. In just four semesters, through rigorous training and genuine passion, SUNY Cobleskill alumna Di Gioia has brought her team to an unprecedented level. Under her leadership, the Western Equestrian Team, for the first time in the intercollegiate history of SUNY Cobleskill, became the Champion High Point Team for its region – the entire team, by default, advanced to the Semifinal Competition in Hamburg, New York.

“This is something that has never been done for any equestrian team at SUNY Cobleskill,” said Morgan O’Sullivan, 20-year-old captain and a top ranked rider in the region. “Before her instruction it was rare for a rider to win consistently, and even more rare that the team did well enough as a whole to win a show.”

According to O’Sullivan, Di Gioia has not only brought the team to a whole new level, she has redefined and expanded the entire Western Program and has “gone 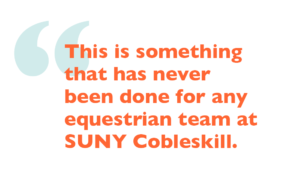 above and beyond” in changing the intercollegiate varsity sport experience for the student athletes.

“She has completely transformed our repertoire of horses…[now] our horses are of the same caliber as those in any large western show ring, which is extremely beneficial for the Western Equestrian Team as well as any student who has the opportunity to ride them,” said Joseph LaRosa, captain of the team. “She is one of the most decorated riders I know.”

“Her ability to actually get on a horse and show us how to improve is a huge factor,” he said. LaRosa pointed out that the new coach not only brings her experience and a vast knowledge of horses and riders to the team, but a forceful energy that spurs the athletes with vigorous spirit. “Lea really pushes us during practice and that obviously helps,” LaRosa exclaimed, “but she still makes it very fun!”

Raised on a fifth generation diversified livestock farm in Higganum, Connecticut, Di Gioia was practically born in the saddle. At the age of three, she started competing in the leadline class, a rival horse show for charmingly attired little vaqueros; by the age of five, she was showing in more independent walk-trot classes. However, during her high school years, Di Gioia stopped riding horses and decided to show sheep instead. As she later explained, “I wanted to try something new” as well as “get away from the pressure” of the horse world.

“I came to SUNY Cobleskill not wanting to do anything with horses,” she said. Nevertheless, by the will of fate and persuasion by Bruce Emanuel, the former western head coach, her entire plan flipped on its head — not only did Di Gioia join the Western Equestrian team, but she soon became its captain as well as the team’s most valuable performer.

“I set the goal my freshman year, I wanted to qualify for Nationals,” she said. “I was riding every day; weekends I was going home and training with as many different people as I could. I didn’t stop riding; I didn’t stop pushing myself till I reached that goal.”

Indeed, she grew to be the first Western Equestrian athlete in the history of SUNY Cobleskill to become a Champion High Point Rider and qualified for Western National Finals three out of four years. By the end of her college career, following in the footsteps of Emanuel, Di Gioia was determined to become a collegiate coach to continue her mentor’s legacy. “Bruce Emanuel has impacted my life and the lives of so many people in a positive way [that] made me want to have the same impact on someone else’s life through coaching and through motivation.”

Di Gioia was not about to give up this goal. 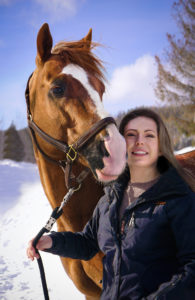 DURING HER SENIOR INTERNSHIP at well-known Powder Brook Farm, Di Gioia had a chance to practice with the members of the South Carolina State University Equestrian Team, one of the most competitive collegiate teams. “I saw how things run with them and I always asked them questions,” she said. Eventually, this served as a strong foundation for the team Di Gioia was going to build.

Due to Di Gioia’s earned reputation, great riders such as Gretchen Mathes, Professional Horsewoman of the Year and one of the world’s top western equestrian judges, and Gene Spagnola, Head Coach of Powder Brook Farm, who have trained numerous world and congress champions, have donated horses to SUNY Cobleskill’s Western Program with exceptional genetic and competitive backgrounds, as well as dedicating their time to develop Di Gioia’s “coaching strategies” and team riders’ horsemanship.

Despite the inner fire, determination to prevail and support from professionals in the horse industry, Di Gioia faced challenges on the road to success. “There was a time I overheard someone talking about me, when I first started coaching,” Di Gioia said, a tinge of frustration on her face. “They said I was too young and didn’t know what I was doing, and that I shouldn’t be coaching.”

“But what I did and what I teach my students to do is to take that negative energy and use it as fuel for your fire to move on and achieve greater things,” Di Gioia said. “And this is exactly what we came out and did this year.”

“This year I got set in my head that we are going to be the champion team in our region,” Di Gioia recalled, and despite the inevitable difficulties, “I believed that we are going to do it.” And so the entire team, caught in the sportive ardor, started practicing five to six days a week, often finishing as late as 10 at night. “At the end of the day,” Di Gioia paused, a proud smile spread across her face, “the amount of countless hours these riders have dedicated to perfecting themselves and preparing for each horse show makes them a champion regardless of whether they come home with a blue ribbon or not.”

COMPETING IN THE INTERCOLLEGIATE equestrian arena is demanding. The riders from each team compete on randomly selected horses for their class; while they are not allowed to warm up their assigned horses, they are required to get on and, in front of the judges, maneuver 1,200 pounds of unfamiliar weight through the fixed pattern.

“Riders are judged not only on their ability to ride…but also on how they present themselves in the arena, which sometimes can become very intimidating,” Di Gioia said.

“Before my first show I was really nervous,” said Wyatt Morley, a 22-year-old junior who recently joined the team. “I just didn’t feel like I was going to do well and so I was really distracted in practice.”

It was hard to imagine this towering, powerfully built man with a large knife in a black sheath hanging from a belt round his waist being worried about anything at all. “After practice was over, Leah pulled me aside and asked if everything was okay,” Wyatt continued. “I told her how I was feeling.” Without hesitation, Di Gioia asked him to get back on and ride for a few more minutes. “When I got off the horse, she said if I ride like that in the show I would be coming home with a blue ribbon and I ended up coming home with not one but two blue ribbons.”

Although Di Gioia strives to motivate and encourage her riders to “crave success rather than fear failure,” she also believes that competition is “not always about winning,” sometimes it’s about “setting a goal, accomplishing that goal, having fun and learning from that.”

Eveline Levin is a sophomore Communications in Technology major at SUNY Cobleskill. This article was written for a Journalism Newswriting/Reporting course. After earning her degree, Levin plans to bring her storytelling skills to her native Ukraine to inspire social change.