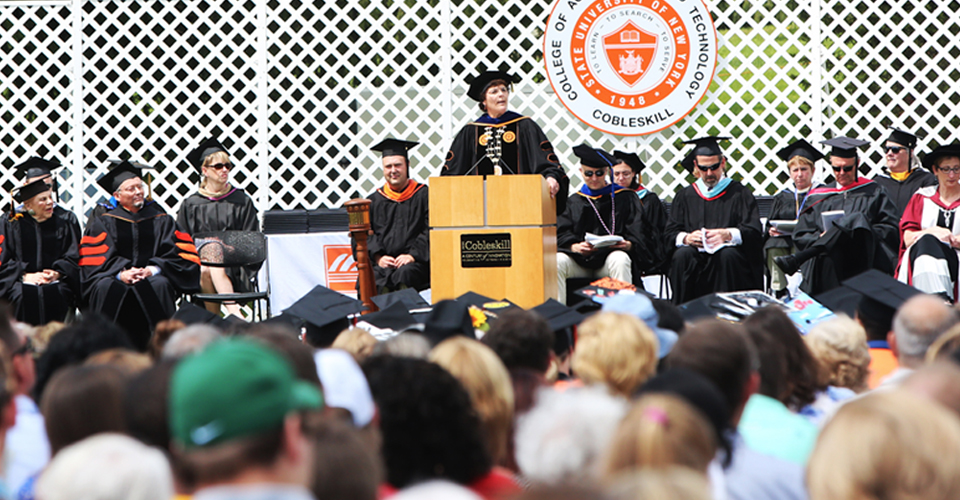 Former U.S. Congressman Christopher P. Gibson and renowned veterinary pathologist Dr. Judith A. St. Leger will deliver the keynote addresses at SUNY Cobleskill’s 99th Commencement on May 13 at 11 a.m. Both will receive honorary doctorates from SUNY during the ceremony.

“Together, Dr. St. Leger and Mr. Gibson embody the ideals of intellectual curiosity and engaged citizenship that SUNY Cobleskill seeks to instill in each of its students,” said SUNY Cobleskill President Dr. Marion A. Terenzio. “Both have been ardent supporters of the College and its students in word and in deed; moreover, both have shown by example what it means to be a scholar, a leader, and a citizen. They are fitting speakers for SUNY Cobleskill and exceptional role models for our students. I am more than proud to welcome Mr. Gibson and Dr. St. Leger to Commencement as keynote speakers.”

St. Leger is the Vice President for Research and Science for SeaWorld Parks and Entertainment. She earned an Associate of Applied Science degree in Agricultural Science: Animal Science from SUNY Cobleskill in 1985 before earning a Doctor of Veterinary Medicine degree from Cornell University.

St. Leger has investigated the natural history of toucans in Peru, the diving physiology of penguins in Antarctica, baleen whale mortalities in Australia and Mexico, and assisted in rehabilitation efforts of pangolins in Vietnam. She is a vocal advocate for STEM education and women in science, speaking regularly at events across the country. She will be presented with an Honorary Doctorate of Science at Commencement.

Gibson has been a distinguished public servant for more than 35 years. In his six years representing New York’s 19th Congressional District in the U.S. House of Representatives, he was recognized for bipartisan statesmanship, ranking first among all House Representatives in the Lugar Policy Center Bipartisan Index. He helped draft the Federal Farm Bill of 2014 and then shepherd its successful passage through Congress.

Prior to serving in Congress, Gibson spent 29 years in the U.S. Army where he rose to the rank of Colonel. He holds a Ph.D. in Government from Cornell University and is the author of “Securing the State,” a 2008 book about civil-military relations in national security decision-making. He is currently a Visiting Professor of Leadership with Williams College. He will be presented with an Honorary Doctorate of Humane Letters at SUNY Cobleskill’s Commencement.