Adjunct Instructor Amy Wilson, who joined the SUNY Cobleskill faculty last fall, is a senior supervisor of the Kom Ahmer & Kom Wasit Archaeological Project (Metelis) in Beheira, Western Delta, Egypt. She has been a member of the mission since the 2013 season and returned for the 2017 season, which wrapped at the end of June.

Here, Wilson talks about her work in Egypt and bringing it back to SUNY Cobleskill.

Q: What are you excavating?

In the simplest terms, we are excavating an ancient city buried beneath the silt of the Nile Delta. The site is comprised of two separate areas, Kom Ahmer and Kom Wasit, which are located approximately 50 km (31 miles) southeast of Alexandria, in the Beheira governorate, or Western Delta of Egypt. The Mission is led by the University of Padova and the Centro Archeologico Italo-Egiziano (CAIE).

We believe that the ancient city is Metelis, or the provincial capital of the area during the Graeco-Roman Period. 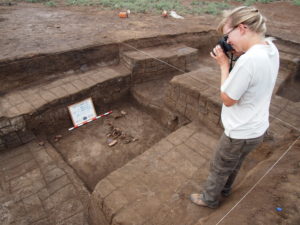 Amy Wilson at work during the 2015 field season. (Photo by Henrik Brahe)

What are you learning from your work? And what do you hope to learn?

With every season, we learn more about the geographical and social relationship between the areas of Kom Ahmer and Kom Wasit, together with their history. Ultimately we hope to reconstruct the history of the site from its foundation to abandonment. We also hope to learn more about the ancient daily lives of the people living in the city as well. 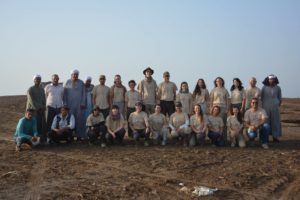 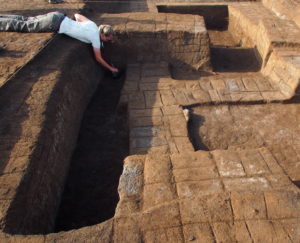 Amy Wilson at work during the 2015 field season. (Photo by Henrik Brahe)

How do you bring your field experiences back to SUNY Cobleskill?

I am new to SUNY Cobleskill, and am currently teaching HIST 103: World Civilization I. In the future I would like to develop and teach a course on ancient Egyptian history. Eventually, I would also like to offer participants the opportunity to work on an archaeological excavation at Kom Ahmer & Kom Wasit.

Here they could develop their skills in excavation, recording materials, onsite field documentation, photography, survey, cataloguing of materials, cleaning and analysis of materials, as well as data management. This would be a unique opportunity for those at SUNY Cobleskill — as well as those within the greater SUNY system.