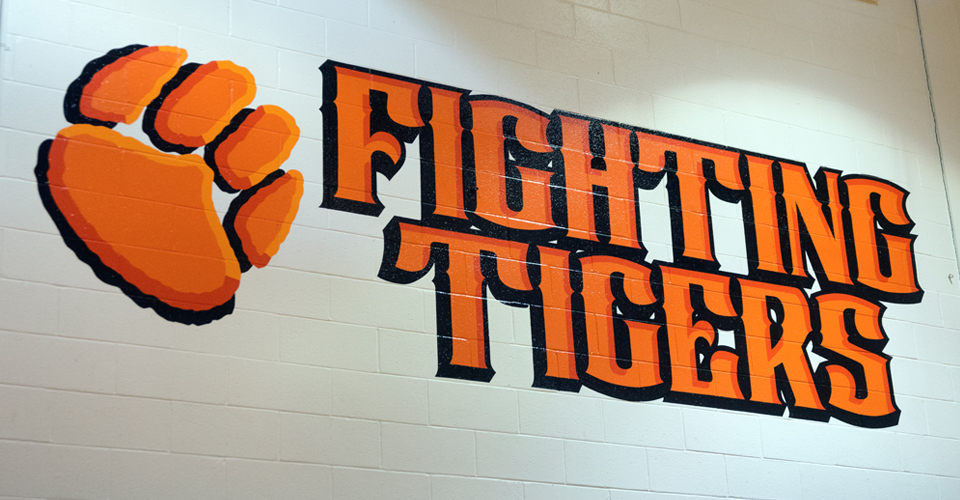 Four more Fighting Tiger alumni will enter the ranks of the all-time best as the SUNY Cobleskill Department of Sport & Exercise inducts the Athletic Hall of Fame Class of 2017 during Homecoming and Family Weekend.

Carlos Dolmo, a three-sport performer for the Fighting Tigers, distinguished himself on the wrestling mat, the baseball diamond and the cross country course.

As a member of the college’s wrestling program he was a two-time Mountain Valley Conference Champion and a two-time NJCAA All-Region III Team selection which earned him a pair of NJCAA National Championship appearances and All-American honors in 1997. Upon graduation, Dolmo transferred to SUNY Oswego where he was a two-time NCAA Division III All-American placing fifth nationally in 1998 in the 190 lbs. class then earning All-American honors in 1999 by placing eighth overall nationally in the heavy weight class.

After a successful high school coaching career at Middleburgh Central School, Mary Hamm came to SUNY Cobleskill in January 1984 and began a 25-year career at the College. She served as the head women’s soccer and softball coach after a brief stint as the women’s basketball team’s co-coach. She was also an instructor in the Department of Physical Education, serving as department chair in 2008.

It was on the soccer field that Hamm had her greatest successes. Under her direction the Fighting Tigers captured Mountain Valley Conference Championships in 1994, 1995, and 1998. During 19 seasons her teams posted a 175-96-17 for an impressive winning percentage of 66.6.

In a career that spanned four decades from 1973 until 2004, Robert Jontos served the Department of Physical Education and Intercollegiate Athletics in a number of different roles including technical assistant, instructor, assistant lacrosse coach, head lacrosse coach and head women’s tennis coach.

Marion Richards has the distinction of being the only player in the history of Fighting Tiger women’s volleyball to garner First Team NJCAA All-American honors, which she earned during the 1998 season. During the same season, she also earned First Team All-NJCAA Region III Team and First Team All-Mountain Valley Conference Team honors while being named the team’s Most Valuable Player for the 1998.

Upon graduating in 2000 with her degree in Early Childhood Education, she accepted a scholarship to play for the College of Saint Rose in Albany at the NCAA Division III Level.

She earned her bachelor’s degree in Elementary Education from Saint Rose and is currently an elementary school teacher in the Albany Public School System in the Arbor Hill area. 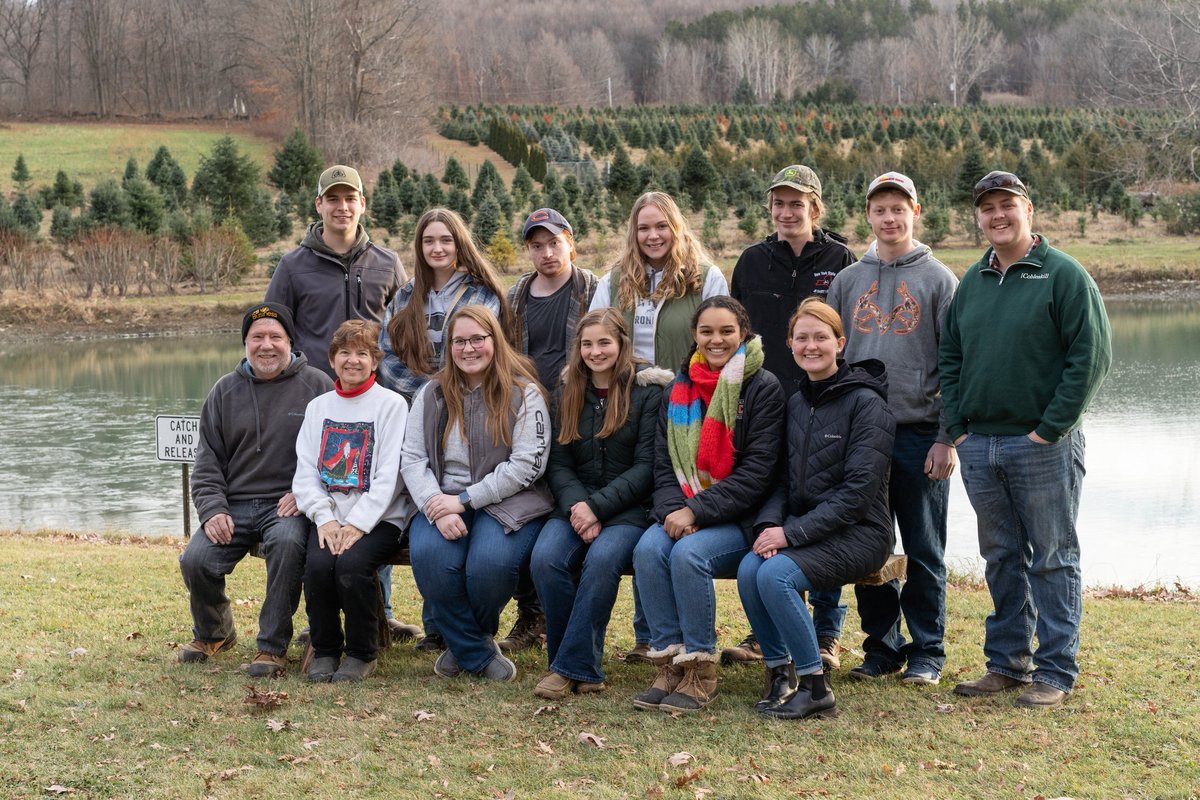 SUNY Cobleskill · 6 days ago
@SUNYCobleskill
Check out our newest #microcredential: Digital Agriculture. In this non-credit series, learners will explore digital technology's influence on our food through interactive lectures, discussions, and active learning exercises. 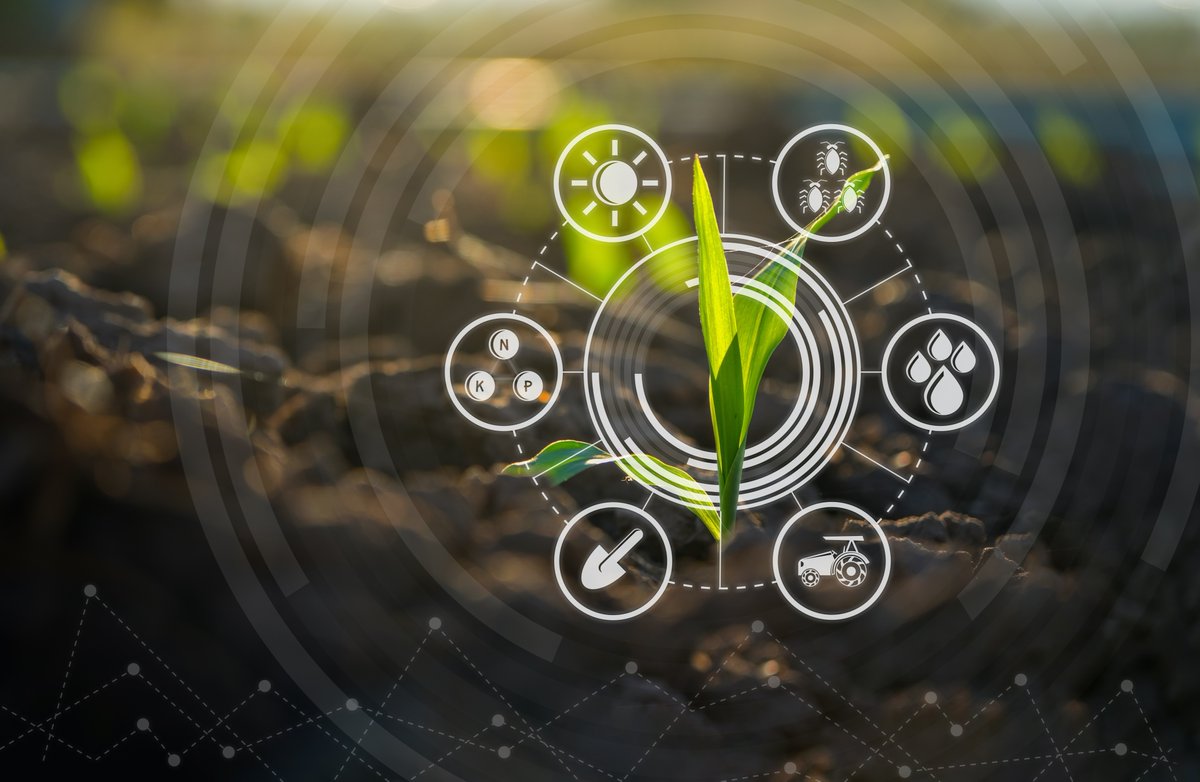 SUNY Cobleskill · 2 weeks ago
@SUNYCobleskill
Today, we are thankful for our community. What are you thankful for this year? #HappyThanksgiving2022 https://t.co/BItJo0D13D
View on Twitter 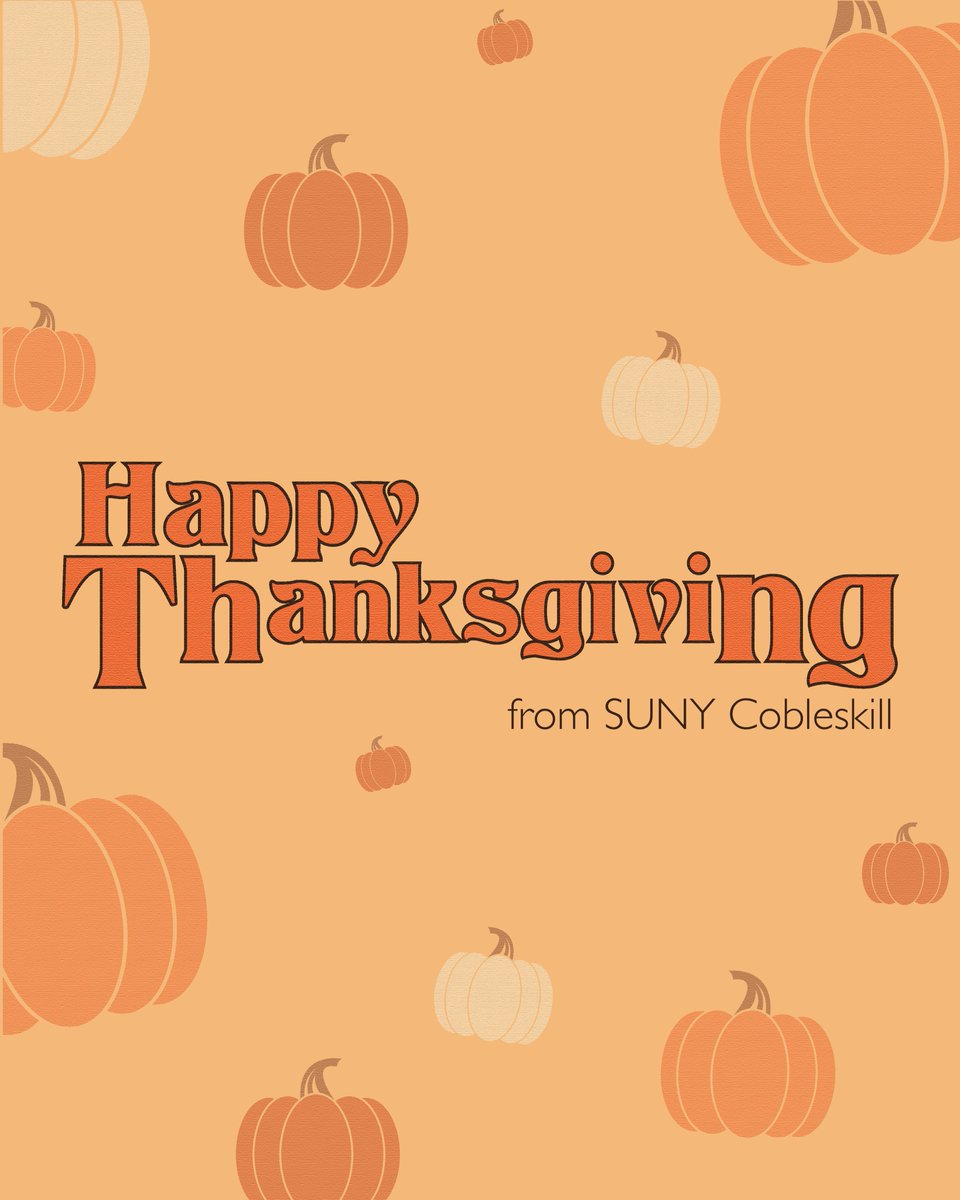 SUNY Cobleskill · 4 weeks ago
@SUNYCobleskill
Our enduring gratitude is with our nation’s veterans today and always, especially for those within our Coby Family, and the many who are a part of our extended campus family. Thank you for your service. https://t.co/JasGPQJ46z
View on Twitter 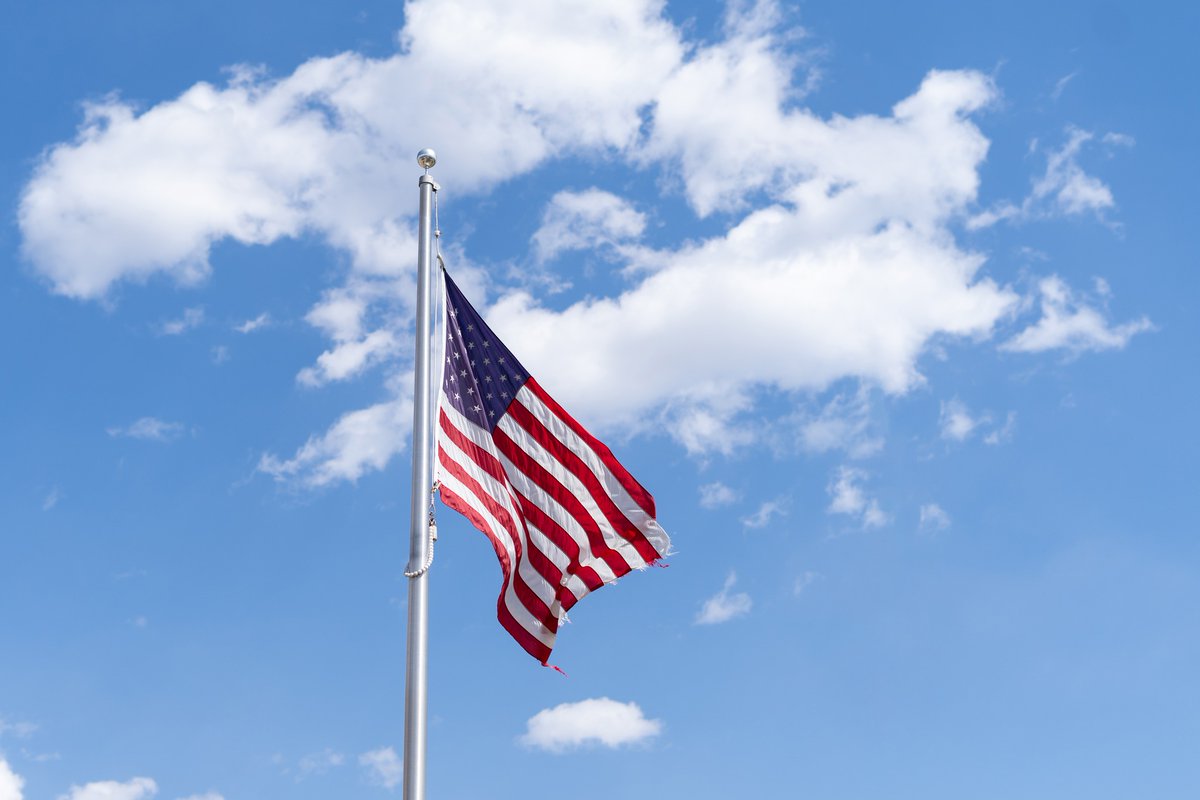 SUNY Cobleskill · 4 weeks ago
@SUNYCobleskill
The annual Veterans Appreciation Dinner is back on November 8th, from 4:30 - 7:00 p.m.
Dinners are $7 and are available for free to Veterans.
All proceeds raised will benefit the Veterans Miracle Center. Dinners are available for pickup only this year. https://t.co/UuogIbwov9
View on Twitter 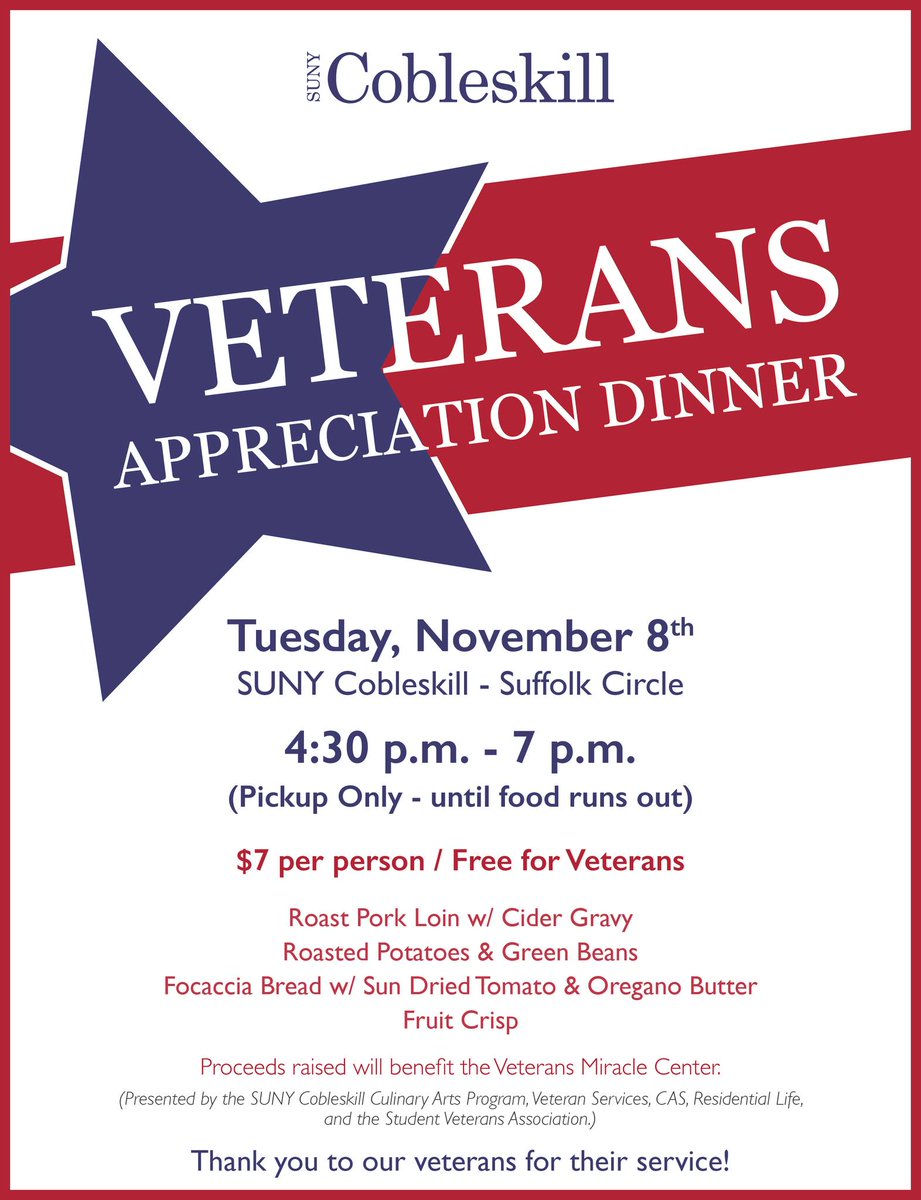