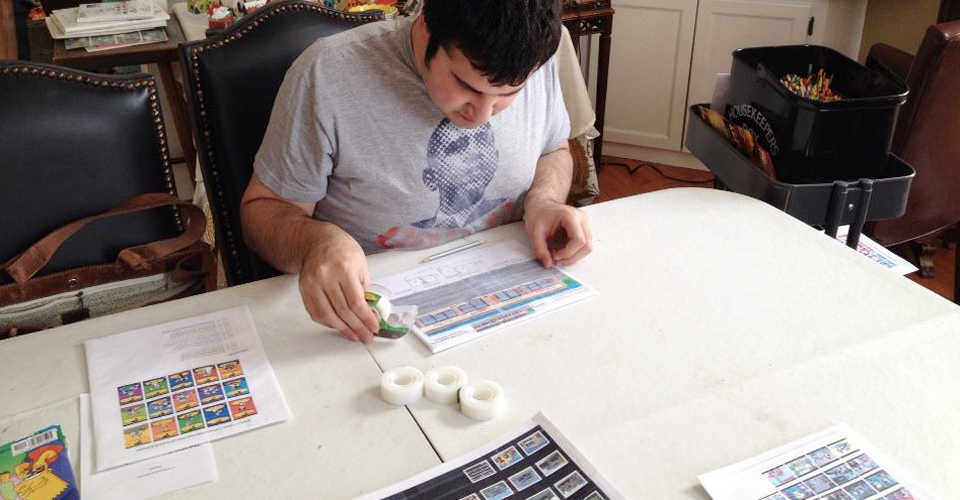 “Nate Katz’s Cooperstown,” an exhibition by SUNY Cobleskill alumnus Nate Katz, examines the details and forms of familiar landmarks in Cooperstown, where he currently lives. The show has been on display at the Fenimore Art Museum since June and runs until July 31.

The Cooperstown show builds on Katz’s detailed portrayals of urban and suburban landscapes like strip malls, restaurants, fast food chains, and houses that have shown in galleries throughout upstate New York and New York City in recent years.

Katz graduated from SUNY Cobleskill in 2012 with a degree in Graphic Design. In addition to his architectural art, he has launched a line of graphic t-shirts based on a design he first developed at SUNY Cobleskill, called “C Boy”. The design, drawn entirely with the letter C, spawned a whole alphabet of characters now called AlphaFolks.

As his show at the Fenimore wraps up, Katz agreed to answer a few questions about his art.

When did you start drawing buildings like this, and why?

I started doing that in 2009, when I started drawing strip malls in Illinois. I wanted to draw things that were updated and renovated. I used to live near Chicago.

Can you tell us about your process? How do you choose what to draw? How did you develop your media?

I draw with paper, pens and colored pencils. First, I draw the picture in pen, and then I colored it with pencils. Then, I put tape on the picture and color on tape as part of the finished process. I get ideas from strip malls I see online, but “Nate Katz’ Cooperstown” was an idea of Paul D’Ambrosio’s [Paul is President of the Fenimore Art Museum].

Can you tell us about your time studying at SUNY Cobleskill and how it helped develop your art?

I was at SUNY Cobleskill from 2009 until I graduated in 2012 with an Associate’s Degree in Graphic Design. [Professor Margrethe] “Grit” Lauber was my teacher and she helped me design better graphics and I started my AlphaFolks t-shirt line and Etsy shop with “C Boy” in one of her classes.

You’ve had multiple exhibitions now and are gaining a reputation as an artist and designer. What’s next? Do you have new art or ideas in the works?

I’m continuing my same art for now. I’m working on a timeline drawing of how the Cooperstown Motel is becoming a new CVS Pharmacy.