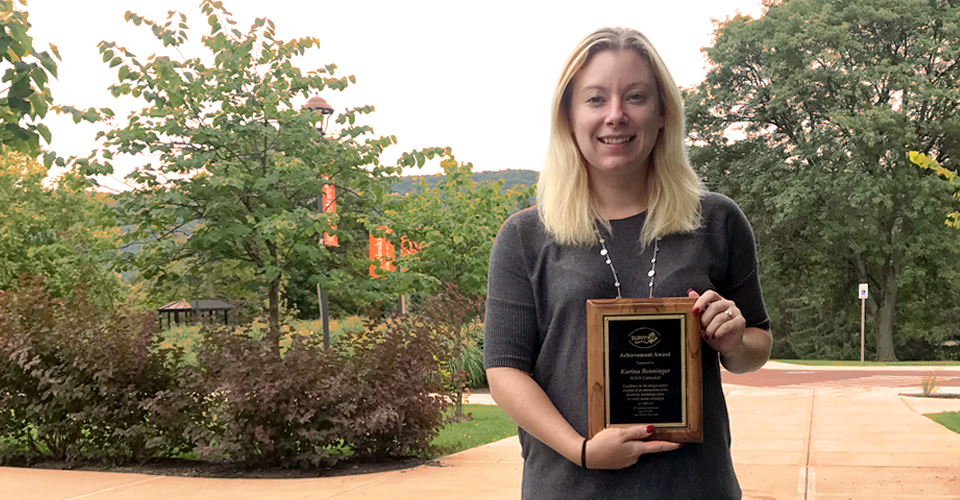 Karina Benninger, Assistant Director/Communications Coordinator in the Office of Admissions at SUNY Cobleskill, was awarded an Achievement Award for excellence in design and creation of digital marketing and social media campaigns at the State University of New York College Admissions Professionals Annual Conference this summer.

Benninger has spearheaded the social media #whatisyourclassroom campaign, which creatively highlights the experiential nature of a SUNY Cobleskill education, as well as innovative Snapchat strategies for the Admissions Office. Her work reflects not only personal excellence, but the vision and hard work of the entire Admissions Office to show prospective students the value of a SUNY Cobleskill education.

#whatisyourclassroom Want to go out in the field during class? A forest? A stream? https://t.co/ShqkT3IPIl pic.twitter.com/cYAaNy6IPC

#takeovertuesday Christina will show you around campus today! Snap us: cobyadmissions pic.twitter.com/0UHYRYkTxd

SUNYCAP Achievement Awards are given to SUNYCAP members who demonstrate exemplary performance and achievement.

“These awards represent the highest level of professionalism in the field of admissions and the admissions profession,” according to SUNYCAP. “They are not annual awards, but are given when an individual of outstanding character, commitment and performance should be recognized.”

Awards are given in five categories. Benninger’s was for “Excellence in the design and/or creation of an admissions print, electronic marketing piece, or social media campaign.”