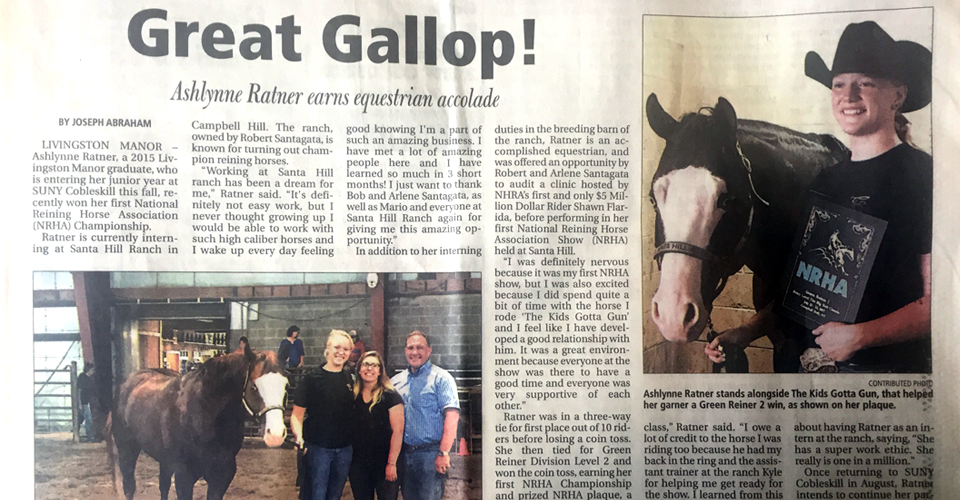 Ratner, a co-captain of SUNY Cobleskill’s Western Equestrian Team, got the opportunity to ride in the show thanks to her summer internship at Santa Hill Ranch in Campbell Hall, New York. The prestigious ranch is known for producing champion reining horses — like The Kids Gotta Gun, the horse that carried her to her win.

“I was definitely nervous because it was my first NRHA show, but I was also excited because I did spend quite a bit of time with the horse I rode, The Kids Gotta Gun, and I feel like I have developed a good relationship with him,” Ratner told the Sullivan County Democrat. “It was a great environment because everyone at the show was there to have a good time and everyone was very supportive of each other.”

The win earned her written accolades from New York State Senator John Bonacic and State Assemblywoman Aileen Gunther. Bonacic wrote, “Achieving this level of success in the competitive world of horse shows involved a lot of practice, and many times giving up other enjoyable activities. I am sure this is a proud moment for your family, coaches, and community. Well done!”

During Ratner’s three-month internship at Santa Hill Ranch, she helped manage the breeding barn as well as pitching in wherever and however she was needed ­— from giving shots and helping a mare give birth to redesigning the ranch’s website and managing social media. She also had the opportunity to attend a clinic by Shawn Flarida, known as NRHA’s “first and only $5 million rider,” just before competing in the championship.

Robert Santagata, the owner of Santa Hill, was impressed enough with Ratner that he has retained her to continue managing the ranch’s website and social media while studying at SUNY Cobleskill this fall and winter. She also plans to return to work at the ranch over winter and summer breaks.