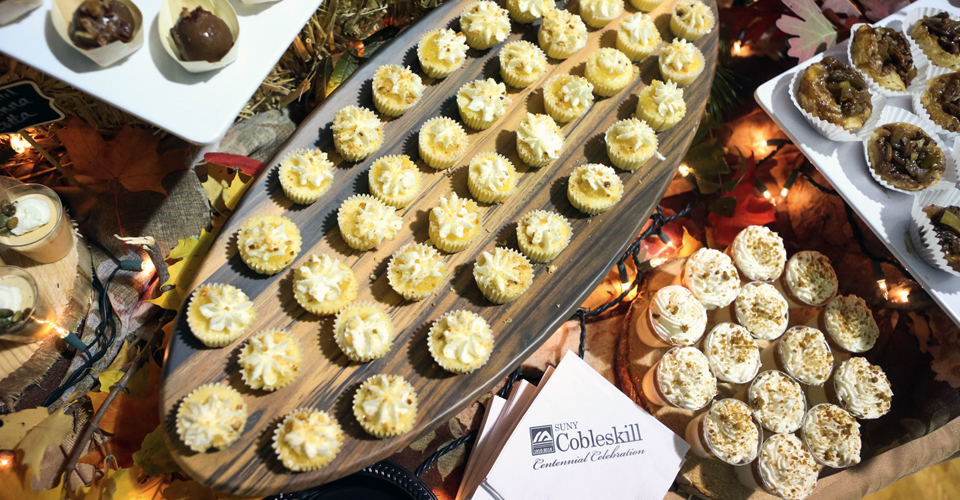 This year’s Culinary Extravaganza will be led by honorary event chair Kathleen King, a 1979 alumna of SUNY Cobleskill and founder of the nationally renowned Tate’s Bake Shop on Long Island. Tate’s is habitually named “Best Bakery” in the Hamptons and has been profiled in outlets like The New York Times and The Wall Street Journal.

“We are so grateful to have the wonderful Kathleen King join us as honorary chair of this year’s Culinary Extravaganza,” said SUNY Cobleskill President Marion Terenzio. “As a successful entrepreneur, Kathleen understands how valuable it is for SUNY Cobleskill students to meet and work with established chefs. The Culinary Extravaganza is always a highlight of the fall semester. I look forward to the warm company, the festive atmosphere, and of course the incredible food.”

The Culinary Extravaganza will feature 18 talented chefs from around the region and beyond preparing locally sourced appetizers, entrees and desserts, along with wine and beer tastings. Among them will be returning favorites Yono Purnomo, owner of Yono’s Restaurant in Albany, Ryan Brooks of Brooks’ House of BBQ, which recently won the James Beard America’s Classic Award, and Michael Kaphan, a SUNY Cobleskill alumnus and founder of the esteemed Purdy’s Farmer and the Fish in North Salem, New York. For a full list of chefs, visit www.cobleskill.edu/yum.

Proceeds from the event will benefit academic programming and scholarships through the SUNY Cobleskill College Foundation, with 50 percent dedicated to the Culinary Arts program. Last year’s event raised more than $23,000 in ticket sales and sponsorships as well as an additional $40,000 throughout the evening to purchase a professional brewing system for SUNY Cobleskill’s new fermentation science programs and a large-batch freezer to create ice cream, gelato, and sorbet with campus-produced milk. The first batches of campus-made ice cream will make their debut at this year’s Culinary Extravaganza.

The Extravaganza kicks off SUNY Cobleskill’s Homecoming and Family Weekend, which features a family fun fair, farmers’ market, demonstrations by the College Woodsmen Team, sporting events, and the alumni awards dinner and Athletic Hall of Fame Induction, among other activities. Saturday’s festivities will culminate in the Homecoming Parade and Fireworks Show beginning at 6:30 p.m.

The Culinary Extravaganza begins at 6 p.m. on October 13 in the Bouck Hall Ballroom at SUNY Cobleskill. Tickets are $75. Reservations required by October 3. Visit Cobleskill.edu/yum or call the Office of College Advancement at 518-255-5524.