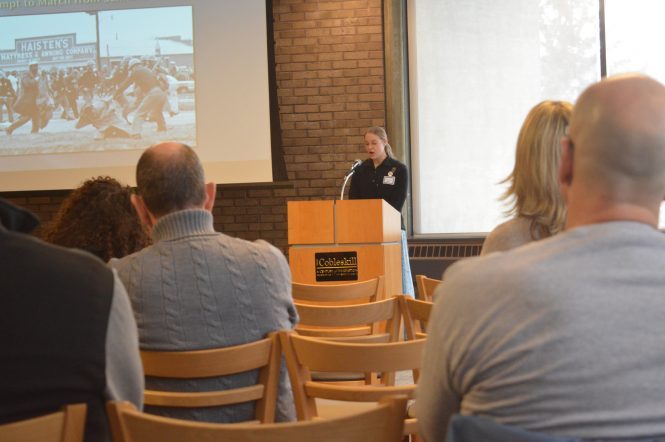 The following is the speech Rachel Blough presented at the Presidents Forum as part of Dr. Martin Luther King Jr. National Day of Service at SUNY Cobleskill, January 21, 2019.

I never knew my grandfather, but I grew up hearing about both his irrepressible joy in life and his search, which started when he was in college, for a way to live a life that truly has meaning. One story that I often heard was of the time he took part in the march from Selma to Montgomery, in 1965. It was only as I became older and learned more about this history of the Civil Rights Movement that I came to understand what it would have meant for a farm boy from Iowa to participate in it.

My grandfather Dwight grew up learning good values and compassion for others from his parents and church. He was a vivid character and stories abound about his love of adventure, humor and daring. However, all who knew him testify that his enthusiasm and inspiration came from his passion to serve and love God and the people around him. So when he learned of the struggle and fight for freedom, equality, and basic human rights in the South of this country during the 1960’s, my grandfather wanted to support the movement and participate in the African American cause. In a letter to Dr. King in May, 1964, he wrote:

“We want to contribute to your organization to show our appreciation for what you are doing to further justice and brotherhood of man. We know that many among you also risk their very lives to do this work and we have a deep respect and awe before this fact.

We are shocked how the forces of violence and hatred seem to overflow so easily and destroy the efforts of those who would pursue only peaceful ways. This certainly makes it very hard to struggle on and persevere. We want with this letter to show you our sympathies and support.”

“The forces of violence which so frequently lie close to the surface of many of our communities will in our conviction be overcome only by love and redemptive suffering. Through our commitment to nonviolence, we seek to bring through direct confrontation such hostilities into the clear light of visibility when this nation can in actuality become the Beloved Community.”

In September of ‘64, my grandfather responded to Dr. King, addressing the violence and tragic deaths that had continued in the South over the summer. He wrote,

“I want not that these words I write to you are just said lightly. It is much to easily done to say many words in this very serious time. We feel that this time requires of us, to live much more deeply and courageously, to sacrifice much more for Him who gives us life and strength, and to sacrifice for our brothers on this earth.”

Clearly, my grandfather saw the need for action and personal sacrifice for the sake of those who were suffering. Therefore, when Dr. King sent out a plea in 1965, calling any ministers, especially white ministers from the North to join him in a march from Selma to Montgomery as a protest to the violence and bloodshed of Bloody Sunday, my grandfather jumped at the invitation. He travelled from his home in New York to Alabama with 2 other ministers from his church, responding to Dr. King’s call that, “Now is the hour for citizens all over this land to make their personal witness.”

The march my grandfather participated in was what some call the “Turn around Tuesday” march. At the time, Dr. King still had not gained permission from the state government to march, so he decided to lead the march over the bridge, kneel down in prayer, and then turn around and continue the march when he’d gained federal permission. During the few days my grandfather was in Selma, he participated in several rallies and protests. Although he heard and saw King speak, he never met him face to face, as King was extremely busy. In an account of his experiences, my grandfather described the great discernment and courage of the movement’s leaders such as Dr. King, Ralph Abernathy, and Fred Shuttlesworth, to direct and guide the movement, especially the young people who were pushing for more violent and confrontational protests and demonstrations. Dr. King always pointed to love and nonviolence. He said, “Love is the only force capable of transforming an enemy into a friend.”

The protests and demonstrations that occurred during the 1960’s, including the one my grandfather was a part of, were mostly illegal, and many were imprisoned or killed for their participation. Obviously, participating in the marches was dangerous for both whites and blacks, but this did not stop the thousands from protesting, nor did this stop my grandfather. I have always loved this word from Dr. King as it describes the courage my grandfather had, but also the courage I need today. He said,

This is what inspires me about my grandfather. Because of his deep love for his fellow man and his wish to live in service to his neighbor, he and my grandmother became members of the Bruderhof, a Christian church whose members share all their possessions and try to live serving each other in the spirit of what Reverend King described as the “beloved community”. They were never famous, yet to their dying day they gave everything to their vision of service to their fellow man through humble acts of love. I am speaking today to honor him – and my grandmother -because I feel obligated to share the legacy he left me. A legacy of service, love and compassion for all people. I believe Dr. King and my grandfather were working for the same goals, even though their actions and life’s works took different forms. Considering the lives of these two men led me to the realization that service to other people has no recipe or formula. Service and kindness can happen anywhere with anyone. Like Dr. King said, “Everybody can be great…because anybody can serve. You don’t have to have a college degree to serve. You don’t have to make your subject and verb agree to serve. You only need a heart full of grace. A soul generated by love.” For me, service can take any form. A smile. A kind word. Holding a door for someone, or simply looking someone in the eye and saying “Hello.”

Moving forward, I want to grab hold of the legacy and example of my grandfather and find ways to reach out to the people around me. I also hope you are inspired to do this. This college, this country and our world need people who are willing to step out of their comfort zones and show love to the people around them. I think it is important that no matter what we are doing, no matter how busy we think we are, we can still reach out to the people around us. King fought for freedom and community, which is what our society needs. In order for us college students to make a positive impact in this world, I feel we need to make friends, connections, networks, and build community. Both Dr. King and my grandfather show me how easy this actually is. Small acts of kindness and friendship go a long way and can impact someone more than we can imagine. Join me in smiling at the person sitting next to you, and wishing them a good day. It’s that simple!

I want to end with one more word from Dr. King.

“We are now faced with the fact that tomorrow is today. We are confronted with the fierce urgency of now. In this unfolding conundrum of life and history, there is such a thing as being too late. This is not time for apathy or complacency. This is a time for vigorous and positive action.”