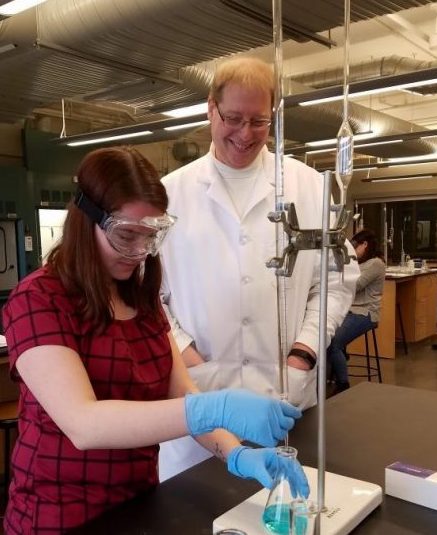 SUNY Cobleskill senior Lyndsey Wanits has earned prestigious recognition for her post-secondary success as a student in a career technical education program that is nontraditional in nature. The New York State Nontraditional Employment & Training (NET) Program, and Center for Women in Government & Civil Society administer the Vanguard Award each year; for 2018 -2019, Wanits has been named one of eight winners. She was the only finalist completing a biotechnology degree.

Wanits is currently interning at the Wadsworth Center in Albany, a laboratory of public health research. Among numerous pursuits throughout her undergraduate education, she has worked as a researcher with SUNY Cobleskill professors Barbara Brabetz and Dr. Neil Law on a project monitoring water quality on the Mohawk River, as a chemist-aide for newborn screening at the New York State Department of Health, and as an ICU technician at Rood and Riddle Equine Hospital in Saratoga. Wanits presented at 2018’s Mohawk Watershed Symposium, at Union College, as well as at the 2018 SUNY Undergraduate Research Conference (SURC) at SUNY Oneonta.

“This truly represents the type of teaching and learning done here,” says College President Marion A. Terenzio. “I know Lyndsey, and know she is a dedicated, driven student.” President Terenzio says she plans to accept Wanits’s invitation to visit the Wadsworth Center this semester.

Wanits initially planned to complete an Animal Science B.S degree at SUNY Cobleskill, with hopes of becoming a large animal veterinarian. Her transition to biotechnology, and participation in diverse research allowed her the ability to move forward with her love of science, she says.

This is expressed in the essay she wrote seeking consideration for the Vanguard Award. The NET Program defines the criterium for Vanguard Award winners as students who are enrolled in “tech prep and other career and technical education programs that are not traditional for their gender.” In Wanits’s case, she says her focus is more on being “up and coming in a revolutionary field,” and having “a large impact on the way in which we think about human sustainability” as well as “looking to have a career in a potentially under represented field.”

That is not to say she is uncomfortable being a role model. “SUNY Cobleskill provided me avenues to open myself up to new experiences, which have shaped me into a future scientific researcher,” says Wanits.

“I am extremely honored to receive this prestigious award. Prior to my collegiate education, I never believed I could or would realize my aspirations and act on them. I hope this gives inspiration to other students who feel they may be limited based on their passions if they do not fit a certain category that is deemed ‘traditional.’ I hope these barriers can be broken and we can move forward as individuals without labels.”

As her academic advisor, Dr. Law nominated Wanits for the Vanguard Award after discussing the nomination with Associate Director of Residential Life Will Kelly. The award has been presented annually since 1993, and is sponsored by the New York State Education Department through a Carl D. Perkins Grant. Wanits will receive her award at a ceremony in Albany this April.