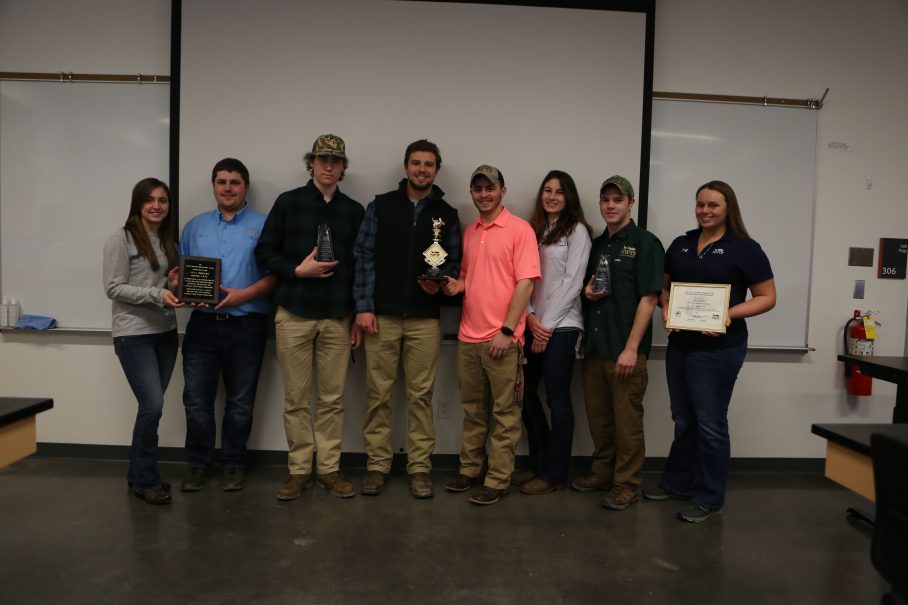 In 2018, SUNY Cobleskill’s chapter of the National Wild Turkey Federation traveled to Nashville, TN to receive a prestigious award. As the collegiate chapter with the highest membership, the NWTF presented the 2017 L.A. Dixon Jr. Memorial Award to the Coby contingent. When the announcer called the chapter, led by President Austin Zweck ‘19, to the stage to receive their trophy, he did so by inviting “The Southern University of New York at ‘Cobbleskill’” to the front of a packed Gaylord Opryland Resort and Convention Center.

When SUNY Cobleskill again boasted the collegiate chapter with the highest membership in 2018, and again headed south to collect their award, Zweck says the announcer knew better. SUNY Cobleskill may be one of only 20-odd colleges with its NWTF chapter, but, points out Zweck, is in a group with major universities including Penn State, University of Alabama, and Southern Illinois University. For two years in a row and counting, SUNY Cobleskill’s NWTF chapter has maintained higher membership than schools with up to 40 times as many enrolled students.

Zweck says he can expect about a dozen students will attend on-campus chapter meetings in the school year. The number of attendees multiplies by about a dozen at annual banquets, themed events that brings supporters from as far away as Long Island.

“Membership is really counted at our banquet events,” says Zweck, explaining the correlation between student-members and active supporters. As students meet throughout the year to plan conservation-themed events and discuss recruiting strategies, the annual banquet is, quite literally, a moneymaker.

“Ninety-seven percent of the money we raise at banquets directly supports the conservation of wild turkeys,” says member Eric Mathiesen ’19. “Even ten years ago we [rarely saw] turkeys in the wild in NY, or in the nation. Now they’re everywhere.”

Wild turkey conservation is a theme of the NWTF, and not in name only. For SUNY Cobleskill’s award-winning chapter, conservation efforts span multiple species, including pheasants, deer, and waterfowl. Chapter members participate in SUNY Cobleskill Accepted Student Days, work with area chapters, and host outdoor events. Every hunt, meeting, and workshop aligns with the NWTF’s mission: a dedication to the conservation of the wild turkey and preservation of our hunting heritage.

Chapter vice president Haley Frederick ‘19 and members Annelyse Matzinger ‘19 and Rebecca Olsen ‘21 provide a perspective on that “heritage” they believe may be unique to SUNY Cobleskill. Frederick helped organize the area’s “Women in the Outdoors” Program events, on behalf of SUNY Cobleskill’s NWTF chapter. Olsen, who, unlike many of her fellow chapter members says she was unfamiliar with the NWTF prior to arriving at SUNY Cobleskill, has followed Frederick and Matzinger’s lead for female chapter members.

Having returned from February’s trip to Nashville, and fresh off yet another award, Zweck and other chapter members are no less committed to evolving SUNY Cobleskill and the NWTF than they were when they joined years ago. Zweck is running for president of his local chapter. Member Ricky Rutherford ‘19 says he plans to launch a chapter in the Syracuse area.

“We reach more than students,” says Mathiesen, of his chapter’s work and growth. Though some of the faces may change as graduation draws near, there is no sign the awards and accolades will be letting up.