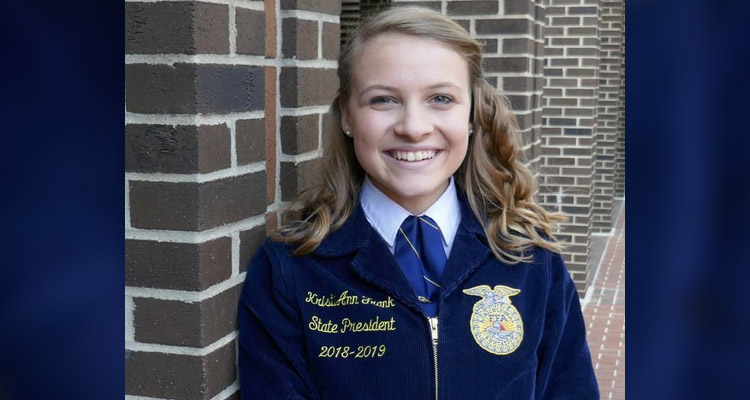 Sharing the Voice of Ag

Her experience is vast, her mission is clear, and her College is SUNY Cobleskill. Meet FFA State President KristiAnn Frank

After completing her first term as a New York FFA Officer last year, KristiAnn Frank re-ran for a position atop the state’s FFA hierarchy. It was the first time in 30 years a previously-appointed officer (Frank had previously served as Sentinel) had decided to run for a new position immediately after completing her previous post. It was a smart decision; Frank is now FFA State President. And she is only a freshman.

“I didn’t realize how much I had imparted on other members last year,” says Frank, humbly. “[FFA] members who I didn’t know were coming up to me and telling me they really liked a speech, or that they thought what I was doing was really leading to positive exposure. So I ran again.”

The road to the presidency for Frank mirrors that of a seasoned politician. Through FFA there have been trips to Albany, New York City, and Washington. There have been conversations with legislators in all three, which, Frank admits, left her wanting more after completing her term as Sentinel. While many in agriculture and even FFA are drawn to agricultural production, Frank says she is more taken with advocacy, which she uses interchangeably with “agvocacy.” It has led her to declare her major in Agricultural Business Management, ensuring a comprehensive education encompassing agriculture from animal science to dairy production to farm appraisal.

“I enjoy what we do in FFA, but more than that I enjoy spreading knowledge by bringing it to nontraditional settings, says Frank.

“Educating and promoting agriculture is a huge part of what we do because in New York there is so much opportunity to communicate with people who are unaware of how broad agriculture is.”

Since joining FFA, Frank has been part of massive state-wide growth. All postsecondary and university students enrolled in classroom-based agricultural programs have gained FFA affiliation within the last two years; membership has grown from roughly 4,500 members to more than 7,000. Also increasing, says Frank, are her options for leadership, exposure and marketing initiatives, conferences, pilot programs – in essence all the things she finds most-motivating.

Campus life complements Frank’s bustling ag-centric schedule. “Ag education is very important to student life,” she says, and vice versa, for those enrolled in SUNY Cobleskill agricultural programs. This include BOCES students. From her insider perspective, Frank cites the SUNY Cobleskill/BOCES alignment as a major contributor to the “voice” and flavor of agricultural education at the College.

Though her term as President projects to be her final in the state organization, Frank says the New York FFA Alumni group will be her next stop. She wants to teach, she says, and is well aware of the lack of prominent ag-specific educators in NY and the northeast as compared to other states and regions.

On her way out the door – it is Monday, so she is on her way to a team-leader workshop that will ultimately grant her credentials to work with sixth graders – Frank again mentions the “voice of ag.” This time, she says, regardless her path, she will continue to strive to make it heard.