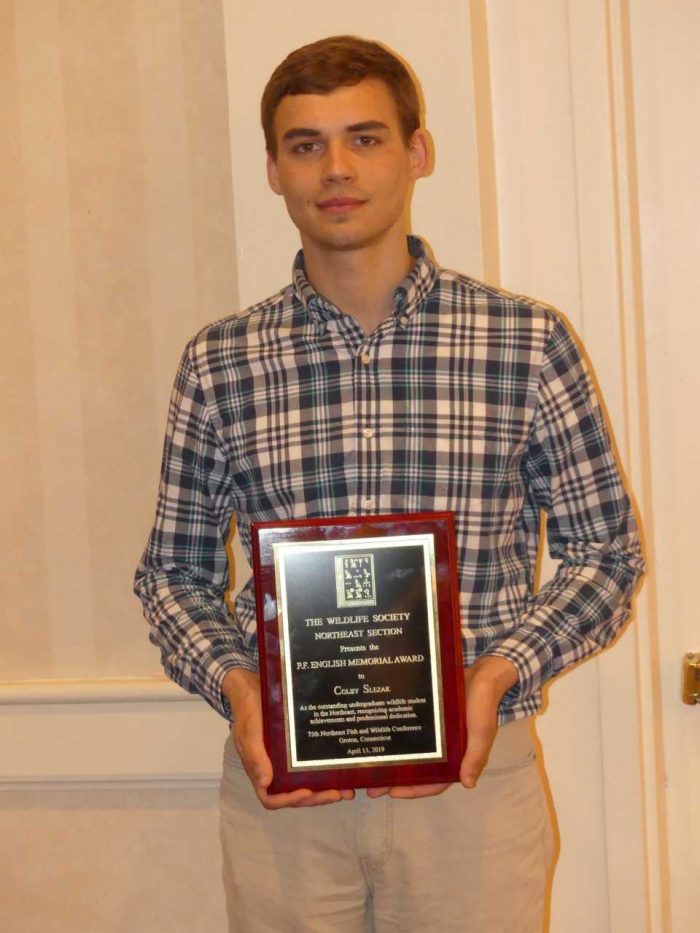 He won’t say it himself, but SUNY Cobleskill’s Colby Slezak has become almost as good at receiving awards as he is at earning them. His latest achievement may be the most prestigious of his undergraduate career: Slezak has been named the 2019 recipient of the P.F. English Memorial Award, presented annually by the Northeast Section of The Wildlife Society. The award goes to a current undergraduate senior in a wildlife biology or wildlife management program in the region, who has showed exemplary promise and achievement in scholarship, work experience, and professional activities. Slezak was nominated for the award by Dr. Roger Masse, and becomes just the second SUNY Cobleskill student, and third SUNY student to win the award in its more-than 40-year history.

Slezak received the award at the 75th Northeast Fish and Wildlife Conference held Monday, April 15 in Groton, Connecticut. He was not the only SUNY Cobleskill winner, however. Much to his surprise, Dr. Masse was named winner of the John Pearce Memorial Award, for his outstanding professional accomplishments in wildlife conservation in the Northeast and dedication to wildlife education. Both awards are described here. 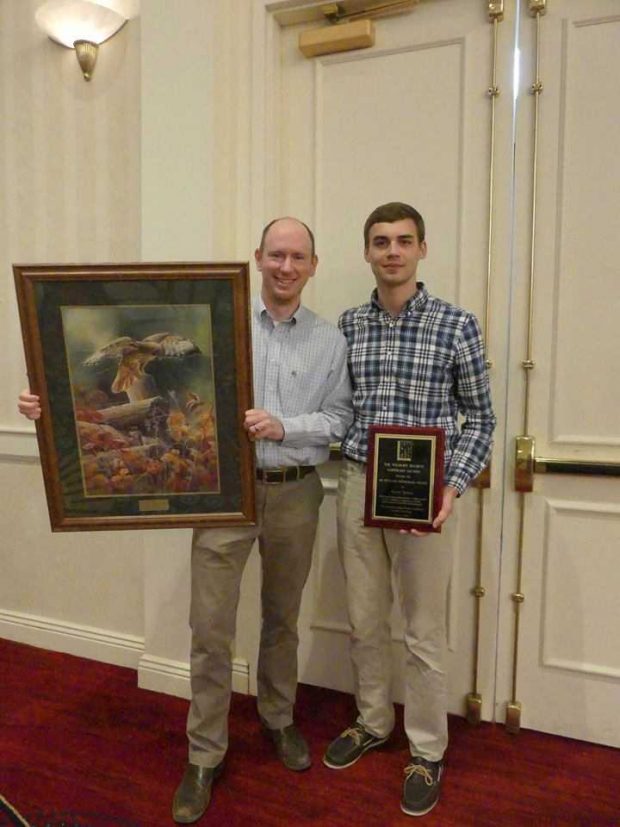 According to Dr. Masse, who has himself been named NYTWS’s Outstanding Professional of the Year, Slezak’s work ethic and desire to open doors for opportunity not only make him an excellent candidate for the P.F. English Award, but also help explain the considerable professional experience Slezak has already created for himself. He points to two experiences in opposite parts of the country to illustrate his point. Upon completing a three-month stint as a moose calf survival technician for the State of Maine last July, with less than two months before the start of the academic year Slezak headed to Idaho to work as a bighorn survival technician. Not many, if any, students would accept such a geographically daunting sequence, says Dr. Masse.

Slezak has also acquired professional, on-the-job experience through positions with the NYS DEC, and U.S. Fish and Wildlife Service (USFWS), where he is currently a shorebird technician. He plans to transition into graduate study in the fall and expand upon his already-acclaimed resume.

Among other publications, Dr. Masse and his conservation-related efforts with ties to the northeast have appeared in “The Journal of Wildlife Management” and “ecoRI News.” His research on the American Woodcock, including its ecology and conservation, is ongoing. On behalf of SUNY Cobleskill, congratulations to Colby Slezak, and Dr. Roger Masse on these outstanding honors.