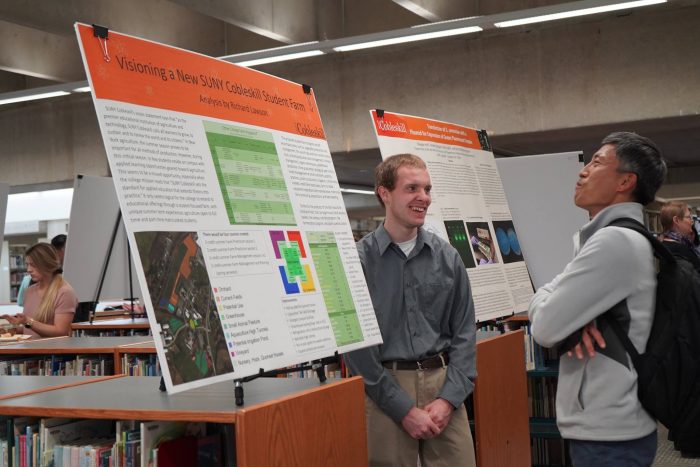 Above: Sung Hee Lee and Richard Lawson share a laugh. Both earned recognition for their SRS contributions.

The 5th Annual Student Research Showcase took center stage for more than 25 presenting SUNY Cobleskill students last week; visual displays on topics ranging from religious and secular rehabilitation programs to the use of the Spanish language in the dairy industry took over Van Wagenen Library’s upper level. A team of judges determined their top three Outstanding Research Projects, and, for the first time, winners were announced for top ENGL 101 Research Papers. In all, nearly 40 students contributed to research projects that will remain on display in the library until May 1.

For many students, like Jessica Kryger Stramba, the opportunity to conduct independent research is an opportunity to extend the reaches of their program’s standard curriculum. Kryger-Stramba, a Wildlife Management major in SUNY Cobleskill’s Honors Program, presented “Moringa: The Power Plant” on the overwhelming nutritional and medicinal benefits of Moringa, which is a tropical/subtropical tree.

“My inspiration comes from Dr. [George] Crosby,” says Kryger-Stramba, referring to SUNY Cobleskill’s Professor of Plant Science. “He presented it in a class as a plant people ‘really ought to know more about.’ Then he brought it up again in a second class I took with him; that’s where the research began.” 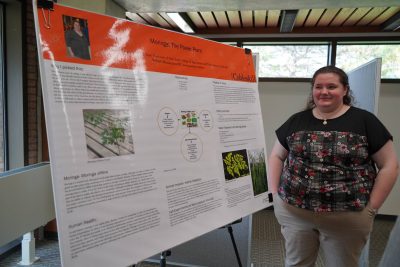 While she admits an eye-opener has been the number of unanswered questions that remain, Kryger-Stramba now says her passion for the plant rivals Dr. Crosby’s. “I was complimented on my passion at [an] Honors conference in Baltimore last week,” she says, laughing. “But if this plant can do what the research says it can do, I am really passionate.” Among other benefits, Moringa contains 30-times as much iron as raw spinach, is known to be anti-fungal, and is an antimicrobial. According to Kryger-Stramba’s research, Moringa is remarkably sustainable given the usability of the entire plant from seeds to leaves.

Presenters like Nick Wierman will look to carry core aspects of their research into professional positions. Wierman’s “Freshwater Mussel Hatchery Development at SUNY Cobleskill: Varying Host Fish Species and Density to Maximize Pyganodon Grandis Transformation” is the culmination of years of work with freshwater mussels at SUNY Cobleskill. Yet it is only the beginning of what he hopes is a career of mussel propagation.

“We are actually a little behind with our freshwater propagation in the Northeast,” Wierman says. “There are 49 species of freshwater mussels in New 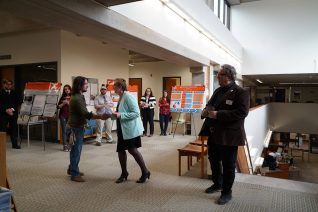 York, and we have seven in Schoharie Creek…I’d like to transition into a position continuing this work.” Wierman estimates he put more than 150 hours into conducting research, of which he says nearly 50 were spent in the field. Wierman was ultimately named runner-up in the Outstanding Research Project category.

First place went to Jennifer Anderson for “The High Impact Practice in Agriculture: Biosecurity.” Anderson says she has noticed a lack of boot-wash stations located in and around the barns on campus. With guidance and inspiration from Dr. Lynn Geoffroy, she set out to determine how improving sanitation measures could ultimately improve animal well-being.

“The only boot-wash station we have on campus right now is at the Dairy Barn,” explains Anderson. “A lot of students and staff move between barns – we don’t have a boot-wash station for [the Livestock Barn.] So I built one.” 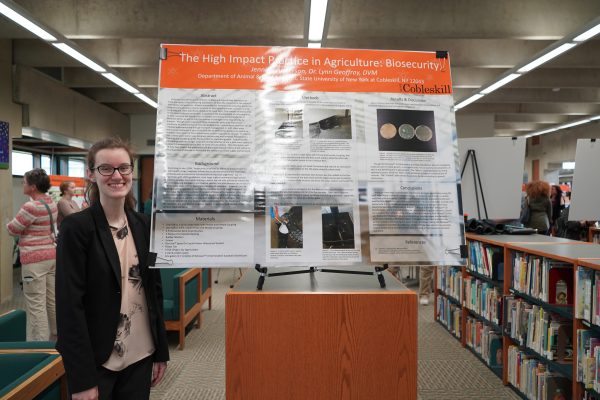 Anderson’s research led her to fill boot-wash stations with an assortment of liquid combinations to see which ensured the highest levels of biosecurity. Variables including the quality and temperature of water in the barns, and the presence of nutrients and minerals, necessitated performing detailed chemical research. Whereas some chemicals target specific pathogens, or fungi, others may completely eliminate microbial growth. Anderson ultimately concluded that simple boot-wash stations, filled with easily-attainable disinfectants, make very effective biosecurity devices.

College Provost Dr. Sue Zimmermann was one of many to tour the showcase. “We are so grateful that you have had this experience to tie up your time at SUNY Cobleskill, or your school year,” said Zimmermann, before announcing the award winners. “We are so impressed, and proud, and really hope this experience encourages you to do more.”

First Place: Alexandra Delvecchio for “The Use of Animals in Medical Research”, nominated by Pat Luria

Second Place: Sung Hee Lee for “Can Soilless Agriculture Save the Earth?”, nominated by Sinikka Grant