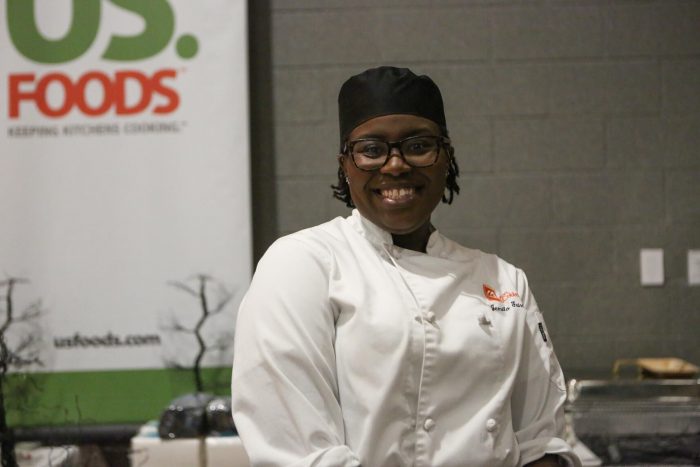 What We Have Come to Expect: A Banner Year in Ag Business, Culinary Arts

Students like Jemila Fairclough, shown at the annual Culinary Extravaganza fundraiser, are those most responsible for an incredible year in SUNY Cobleskill’s Agricultural Business & Culinary Arts Program

The academic repute and hands-on learning that have long-characterized SUNY Cobleskill’s Agricultural Business & Culinary Arts Department is hardly unfamiliar. Quite literally from the farm to the table, students and members of faculty reached new heights this year, all while continuing to embody the College’s vision, mission, and values.

In September 2018, a collaboration between Ag Business and Culinary Arts students became reality, with the opening of the Carriage House Café and General Store on Homecoming & Family Weekend. Taking full advantage of a historic and reimagined space, the success of the Carriage House nine months into business is a result of dedicated students who, with faculty guidance, have succeeded in creating campus’s top destination for baked goods, prepared foods, clothing, and a smorgasbord of College and area-produced products. The business functions as a real-life learning laboratory for students, as well as a retailer for local farmers and artisans, who market a wide range of products here in Schoharie County. Through the Institute for Rural Vitality’s Center for Business Development, the Carriage House also helps businesses gauge the success of products and marketing strategies in an active retail environment. 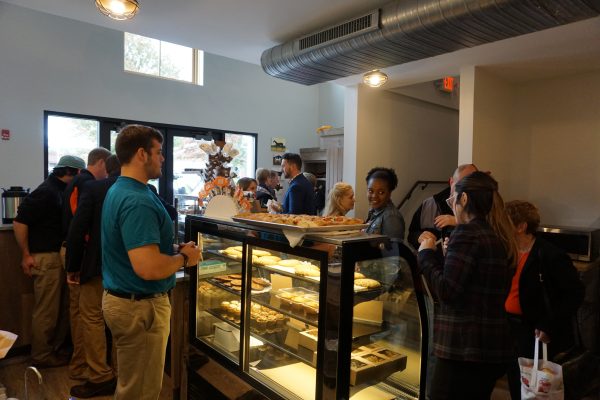 The star-sellers at the Carriage House most mornings are the baked goods – SUNY Cobleskill embraces its “Food Campus” moniker. To this point, it has been an eventful year in the campus kitchens. In April, the student-duo of Brianna Zabrisky and Chris Merandi was crowned champions in a NY-raised beef cook-off, outdueling four competing schools. Led by Chef/Instructor Mike Lapi, the team’s Beef Tataki and roasted ribeye wowed judges, and highlighted a “Farm to Fork” weekend coordinated by the New York Beef Council.

In March, the College re-opened its culinary kitchens for the sixth time, to participants in the annual Junior Iron Chef competition. Two competitions featuring talented middle and high school student-chefs reached boiling points, as students were tasked with creating nutritious dishes built from fresh, colorful produce that could be found in any school cafeteria. Personalities from around the region ultimately crowned winners, including the “Wrap Stars” from Cobleskill’s Golding Middle School.

Junior Iron Chef was a hit this weekend. Congrats to our middle school winners from Golding Middle School, and to all the teams that participated. Thanks to @cnynewscom for capturing this photo.#goodfood #HealthyFood #culinary. https://t.co/26ScddeG7N pic.twitter.com/x9qXqjIDcj

Student achievements this year once again extended beyond the reaches of New York. For the fifth time, SUNY Cobleskill’s National Agri-Marketing Association (NAMA) team presented at the organization’s national conference, held in Kansas City, Missouri. Presenting students tantalized judges with a thoroughly-designed and thoughtfully-marketed margarita mix, improving their score from last year’s competition. SUNY Cobleskill boasts one of fewer than 40 collegiate NAMA teams, and is the only one in New York. Whereas the Carriage House Café and General Store provides valuable, real-world experience in a day-to-day retail setting, NAMA team members conceptualize, design, market, and present a product all their own to a daunting panel of judges on a national stage – tremendous experience for Ag Business students.

Seth Browe is one of those students. Browe, a sophomore, has been elected president of the National Professional Agriculture Student Organization. He is also, logically, president of SUNY Cobleskill’s chapter of the organization.

March 13-16, Browe led a group of seven SUNY Cobleskill students to the PAS National Conference, in Denver. While his obligations often pertain to the national organization, all in attendance from SUNY Cobleskill – along with more than 600 students nationwide – earned valuable networking opportunities and professional development.

The Conference also hosted various student-competitions. Of nearly 40 competitors, Laura Littrell and Tracy Rudgers finished in the top-10 in the individual dairy specialist competition, which consists of a general knowledge test, as well as an on-the-spot presentation of current industry events. Lyndsey Weykman took top honors in the agricultural education specialist event, where she was tasked with writing and delivering a lesson plan to a team of judges acting as students. Abigail Armstrong, meanwhile, finished as the runner up in the career planning competition. As a group, the Coby contingent put a bow on their conference with a semifinal appearance in the Quiz Bowl.

Through these accomplishments and more, current Ag Business and Culinary students are carrying on a legacy left by graduates, as well as paving the way for the successful endeavors of future students. As always, stay up to date on their news, and news from across campus, at https://web.cobleskill.edu/media/.