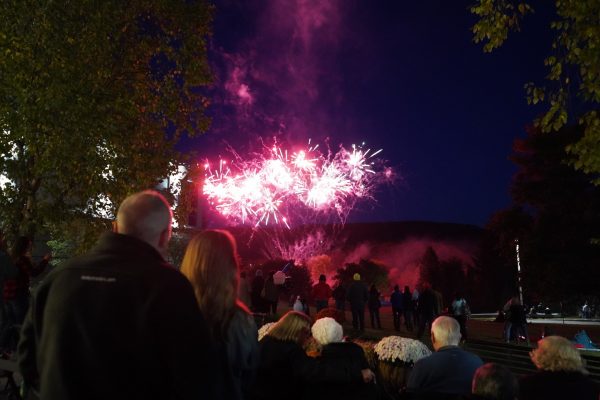 It was standing room-only at the 8th Annual Culinary Extravaganza Thursday evening, as SUNY Cobleskill kicked off Homecoming & Family Weekend 2019. Paired once again with their professional counterparts, SUNY Cobleskill Culinary Arts student-chefs served up dishes with an international flare. Guests in attendance worked a packed Bouck Ballroom, lavished with banquet-quality décor and bustling with philanthropic energy, as the College exceeded its goal by raising more than $30,000 in support of the College Annual Fund and Culinary Arts programming. This year’s Extravaganza featured all the culinary delights guests have come to expect over the years, along with an ice sculpture, student-chef competition, and even an auctioneer.

Extravagant, isn’t it? Culinary Extravaganza is underway. And with that, we commence Homecoming & Family Weekend. pic.twitter.com/bMF9nzGQ1R

The campus community was back at it bright and early Saturday morning. Agricultural Engineering Alumni, visiting guests, and future Fighting Tigers took in the Ag Eng Tractor Show, which preceded a special ceremony in Curtis Mott Hall to honor retiring Ag Eng Professor Bruce Wright. Joined by his family and friends, as well as alumni spanning his 42 years of service to SUNY Cobleskill, Bruce recounted his unprecedented tenure at the College in lighthearted – yet touching reflections.

The theme of honor carried on through Saturday morning. President Terenzio led the College in recognizing three members of the campus community for their lasting contributions in the inaugural Naming Ceremony, held in Bouck Theater. Kenneth Olcott, Cheryl (Cherie) Stevens, and Howard Sidney will forever live in honor at the College, and friends and family members joined together for the unveiling of portraits of all three. Olcott himself, with his wife Jane, was in attendance for the ceremony. “Our ability to (enact) our vision today sits on the shoulders of these three individuals,” said President Terenzio, in closing.

It has been an honor serving @SUNYCobleskill with Professor Bruce Wright. His impact on our students will be felt far into the future …TY… from @CobleskillStyle https://t.co/sK1rXCXfBF

In an afternoon ceremony, the Class of 2019 entered the SUNY Cobleskill Athletic Hall of Fame. For the first time in history a full team will be enshrined in the Hall, as the College welcomed back three members of the storied 1959 Men’s Cross Country Team to accept induction on behalf of their team and teammates. Lew Faxon, Richard Schopinksy, and John Butler each spoke of their time at the College, and the lasting impact of their coach Professor Steven “Pop” Warde. In a surprise, Warde’s son, Newell Warde, PhD, joined the three HOFers for a reunion. The Athletic Hall of Fame Ceremony was once again a shared event, with the College also honoring a distinguished class of alumni award winners. “Our stewards of place now go globally,” said President Terenzio, after giving the ceremony’s final congratulations. “And it all starts right here in Cobleskill.”

A Golden Grads mixer featuring the Class of 1969, campus trolley tours, Homecoming Parade, and annual fireworks show wrapped up the weekend, beneath and in clear skies. To see some of the weekend’s best imagery, be sure to check social media: