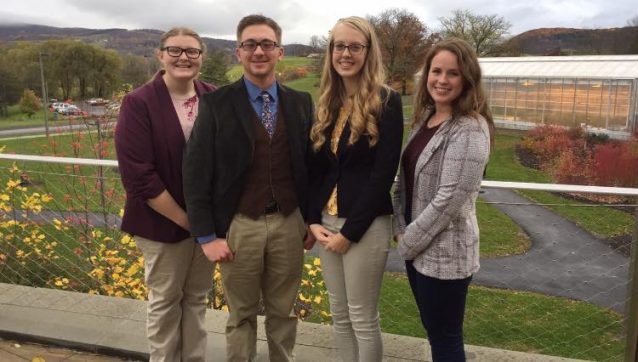 SUNY Cobleskill’s reward for posting consecutive victories in the New York Farm Bureau Discussion Meet in 2017 and 2018 was the opportunity to host the event in 2019. With guidance from 2018 winner (and current National Professional Agriculture Student Organization (PAS) president Seth Browe, SUNY Cobleskill once again took top honors, clinching the event over competitors from Cornell College of Agriculture and Life Sciences (CALS) and SUNY Morrisville.

“I had the opportunity to compete in my first Discussion Meet last year, and went into the experience just hoping to make it through the first round,” says Weykman. “After just the first round I was hooked. At the end of the day I was thrilled to have made it all the way to the final four. I watched Seth (Browe) take the competition and I was inspired by him to compete again this year.”

Three members of the winning quartet, and Browe, are current Agricultural Business Management students. Browe and Hill cite the nature of their program, and, specifically, the diversity of how knowledge is shared and presented, as integral to their ability to articulate concepts to Meeting judges.

“Behind the scenes, there is a ton of preparation that the audience does not see, which is exactly what allows for the conversation to continue to flow and be constructive,” says Weykman. One of the many things that Farm Bureau does extremely well is pose questions that are relevant, and (really) do need solving. In order to truly absorb these questions, we conduct research, participate in training calls, consult with College faculty and staff, and discuss our interpretations of the information as a group.”

“We try to toss around ideas as we are introduced to them, and the discussions that happen in class are often the best way we have to explore a topic,” adds Hill. The recent iteration of the Farm Bill, prominence of cell-based and value-added food products, and even the role of Farm Bureau in combatting opioid dependence and addiction, are examples of topics scrutinized in class discussions, and that often appear as prompts in Discussion Meets. Of added support says Hill is that SUNY Cobleskill Agricultural Business Management faculty members possess expertise in the economic, financial, and marketing sectors of agriculture.

This is not to say Farm Bureau/PAS activities are restricted to Agricultural Business Management students.

“Lindsey (Weykman) is an Animal Science (major), and we have had winners here from (the) Agricultural Engineering (Department) as well,” says Browe. “The topics we practice and that are prompted in Discussion Meets span the entire spectrum of those with which Farm Bureau maintains a stake. That includes policy, systems, trends, and everything in between.”

Though Browe earned an invitation to attend last year’s AFBF Young Farmer & Rancher Conference, in Milwaukee, he was unable to attend given his PAS presidency. While his string of ineligibilities continues (as reigning Discussion Meet victor, he was not allowed to participate this year) he remains an active team participant, though now in a leadership role. He also led SUNY Cobleskill students to the PAS National Conference in Colorado last March. It is these themes of community and teamwork that have established a sort of Farm Bureau dynasty in Cobleskill.

“One of my favorite aspects is that we support each other, even though we (each) have different ideas and talking points that we view as important to bring to the discussion,” says Weykman. It is awesome to have a team at SUNY Cobleskill that is made up of members from different majors and agricultural backgrounds. I really feel this contributes majorly to all our success.”

Hill, at least on this point, agrees entirely. “We compete as individuals, but we practice as a team. “It is competitive – it is spirited – and it is something that makes us stronger.”