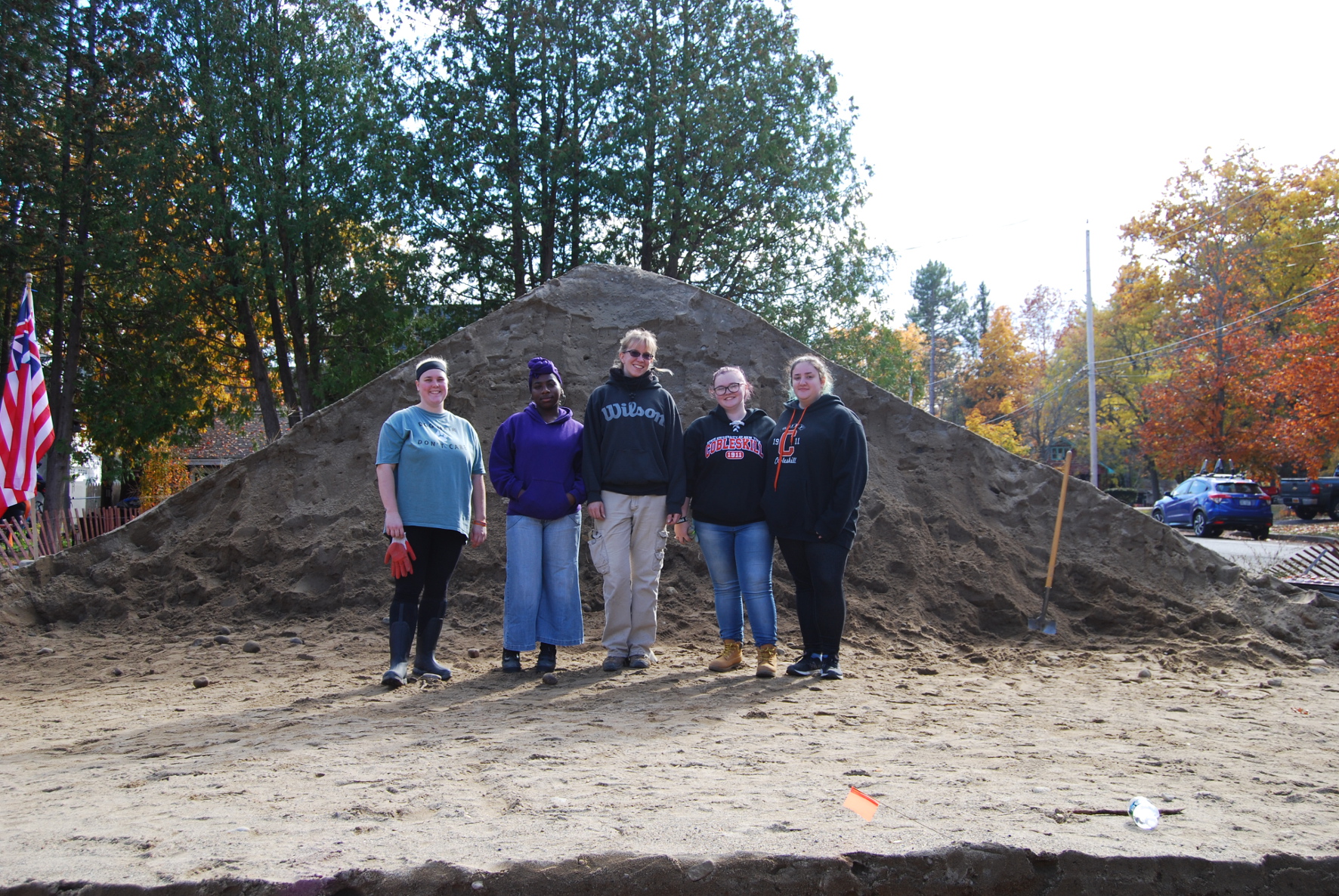 Students enrolled in ANTH 200 – Introduction to Archaeology this semester should have anticipated coursework geared towards the principles and methods of contemporary archaeological science.  What they are receiving (in addition to instruction from professional field archaeologist and SUNY Cobleskill Adjunct Lecturer Amy Wilson) is an impromptu opportunity to contribute to an active recovery effort.

In collaboration with the Town and Village of Lake George, the property owner, the NYS Department of Environmental Conservation (DEC) and New York State Museum (NYSM), Wilson and four students have joined a volunteer project to recover just about whatever they can unearth from Courtland Street Cemetery, in Lake George. Working also with student-volunteers from SUNY Potsdam’s Department of Anthropology and Archaeology, the expedition has so far recovered partial remains from at least 19 individuals. Wilson, NYSM Curator of Bioarcheology Lisa Anderson, and others on the team now theorize the site was formerly a cemetery associated with the American Revolution era general hospital established at Lake George in 1776.

This mission of salvage (or rescue) archaeology has quite a backstory, even before ever reaching Wilson. The Lake George site is the location of pending construction. Before it resumes, Anderson has been charged with identifying and, at least, identifying the number of individuals whose remains are present at the onetime cemetery. Other variables the remains may be able to indicate include sex, age at death, physical stresses, and cause of death. It is the final goal of all involved to build a memorial recognizing those recovered from the site. The individuals recovered are likely Revolutionary War soldiers, and others associated with them.

The accelerated progression from classroom lessons on the methods of analysis to active field excavation is a first for SUNY Cobleskill students, says Wilson. The volunteers are Michelle Cichetti, Camberlee Hoop, Adriana Jacobs, and Mia McKinney.

“I basically told them ‘you will find something,’” says Wilson, of how she pitched the opportunity to her class. The group has joined for one session, in October, and was due back in Lake George in mid-November, before earlier-than-expected cold weather froze the group out of its follow-up. All four students managed to discover something unique on their debut dig, mainly fragments of different bone including digits, teeth, and a patella. Cichetti discovered a 1st Pennsylvania Battalion uniform button – one of many uniform buttons found at the site.

“The most surprising part of the experience was how many people in the community showed up and were willing to help in any way that they could,” says Jacobs, who holds an associate’s degree in Criminal Justice with a concentration in Forensic Science. “I admire the community (volunteers who) continue to make progress at the site.” 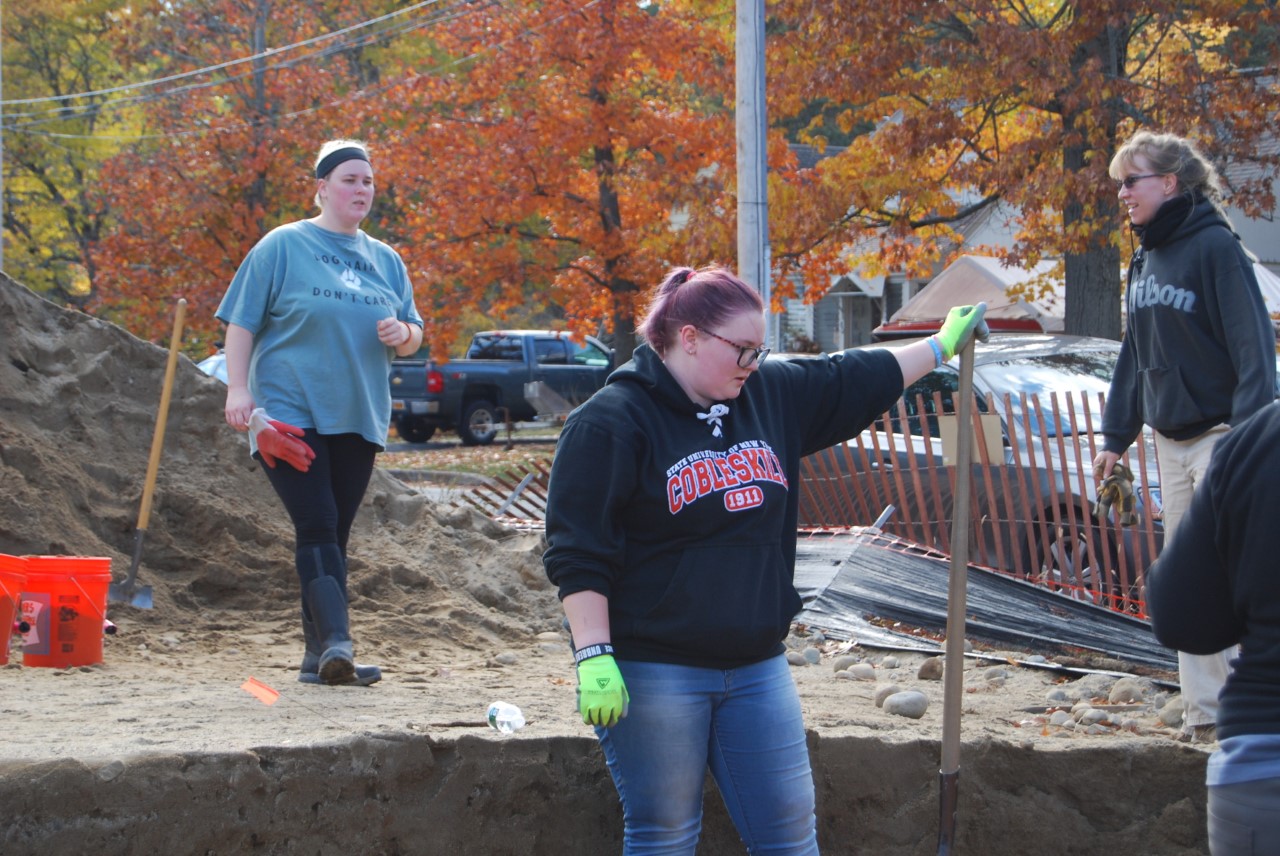 At the scene, a pile of earth Wilson compares in size to normal classroom greeted volunteers. Wilson attempted to caution those she had enlisted on the deceptively-rigorous physical demands associated with an excavation, as well as instill lessons on the value of patience, thoroughness, and collaboration. Ultimately, “I’m pretty sure everyone slept well that night,” says Wilson.

With winter and frozen ground here to stay, it is a race against time for Anderson and the DEC team to wrap up the excavation. While SUNY Cobleskill’s participation has ceased for now, a senior team of project assignees and volunteers, including Wilson herself, will work as long as is possible.