SUNY Cobleskill’s Men’s Cross Country Team finished their conference season this past weekend, taking home both team and individual accolades from the North Atlantic Conference (NAC) Championships. The Fighting Tigers posted a team total of 31 points to capture the league’s 2021 team championship over a 10-team field on Saturday at Thomas College.

Cobleskill had entered the meet as the projected favorite, led by first-year runner Eamonn Sullivan, who won the league’s individual title by outdistancing the 86-runner field with a time of 27:32.0 to earn first-team all-conference honors. The victory was Sullivan’s fifth invitational win of the season. 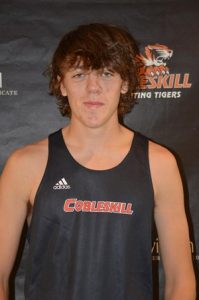 Sullivan was also named NAC Conference Runner of the Year and Rookie of the Year by the NAC coaches.

“Eamonn has had a great season to date, and it is a direct result of his work ethic and the sound fundamental teaching he received in high school at Fordham Prep,” said head coach Mitch Tomaszkiewicz. “Eamonn has brought a different dimension to our program this year in that he is a true number one runner who trains hard and who competes hard.

“Beyond that, and this is going to sound strange to cross country fans, he always runs happy. When he races, he always is smiling and having fun with the race. Sometimes it really looks like he is just out for a run with a bunch of friends on a Saturday afternoon in the park. I am fortunate to get to work with him on a daily basis because he makes coaching very enjoyable.”

Tomaszkiewicz earned NAC Coach of the Year honors. Now in his 29th year at the helm of the program at both the NJCAA and NCAA levels of competition, Tomaszkiewicz has guided the Fighting Tigers men’s and women’s teams to 19 conference championships, 106 invitational wins, three NJCAA Region III Division III Championships and the 2000 NJCAA Division III Women’s National Championship. He has earned Coach-of-the-Year honors for his men’s and women’s teams in the Mountain Valley Conference, North Eastern Athletic Conference, and now the North Atlantic Conference (NAC) 16 times.

SUNY Cobleskill will next be in action on Saturday, November 13, when they travel to Geneseo, N.Y. for the 2021 NCAA Division III Niagara Regional Championships hosted by SUNY Geneseo. The team is currently ranked sixth in the United States Track & Field and Cross Country Coaches Association (USTFCCCA) NCAA Division III Niagara Region Coaches Poll.